In the prevention of cardiovascular disease (CVD), great importance is given to timely detection and correction of cardiovascular risk factors. One of the risk factors for heart disease is the metabolic syndrome (MS), which is a complex of pathogenetically interrelated metabolic disorders caused by insulin resistance, compensatory hyperinsulinemia, which contributes to the formation of arterial hypertension, abdominal and visceral obesity, dyslipidemia, hyperglycemia, chronic subclinical inflammation, and disruption of the hemostasis system. To date, the main pathogenetic mechanisms of MS have not yet been agreed upon. According to most publications, the syndrome is based on insulin resistance and central obesity. In addition, other mechanisms that may underlie the pathogenesis of MS have been described: chronic activation of the immune system, impaired functioning of the hypothalamic-pituitary-adrenal axis, changes in the action of glucocorticoid hormones, chronic stress, production of excessive amounts of cytokines, hormones and other biologically active substances by adipocytes. Metabolic syndrome often occurs at a young age; its complete symptom complex develops in adulthood when the patient suffers from arterial hypertension, ischemic heart disease, and diabetes mellitus with atherosclerotic vascular involvement. This significantly increases the risk of stroke or myocardial infarction. Therefore, an urgent task is early diagnosis of MS, heart involvement in MS, especially in young and middle-aged patients. The most pronounced effect of treatment and prophylactic measures to reduce mortality from CVD should be expected in this group. The aim of the researchis to promote early diagnosis and to study the features of CVD in MS in young and middle-aged patients. The object and methods of the research.The study is based on examination of 92 patients of young (35-44 years old) and middle age (44-60 years) according to the WHO classification. According to the results of Holter monitoring, 37 patients (40% of the total number of patients) were identified, of which 25 (67.6%) were men and the rest – 12 (32.4%) – women, with disrupted processes of repolarization with episodes of ST segment change, T wave. Changes were of the nature of depression or elevation. In particular, depression of the segment was observed in 60% of cases, elevation – in 26.7% and in 13.3% of cases, there was a depression and segment elevation. Among them: the subjects, who presented three existing MS symptoms: 29.8% of the total; 72.7% with ischemic changes; patients with four or more MS manifestations accounted for 18% of the total and 100% had ischemic changes. In 40% of patients, we observed concentric remodeling of the left ventricle (LV), in 12% – its hypertrophy (in 17% – dilatation of LA, 5% – dilatation of LV). Studying the correlation between echocardiographic parameters and signs of MS, it was established that with the increase in the abnormal obesity characteristic of MS, the walls of the LV thicken and its hypertrophy is increasing, the index of which is the mass index of LV. The growth is also associated with the expansion of the cavities of the heart and the decrease in the contractility of the lungs. Conclusions 1. Manifestations of MS are a common problem among young and middle-aged patients. 2. There is an observed relationship between the number of symptoms of MS and the presence of ischemic changes. 3. It is expedient to carry out daily monitoring of ECG, echocardiography in patients with MS for early detection of changes in the state of coronary circulatory system 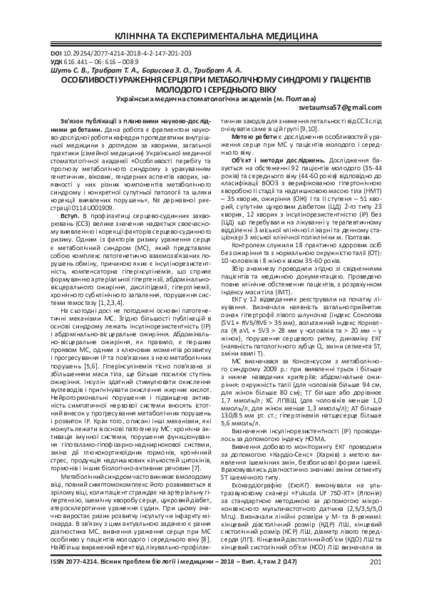