Bulletin of problems biology and medicine / Issue 4 Part 2 (147), 2018 / INVESTIGATION OF THE EFFECT OF NON-REMOVABLE ORTHOPEDIC STRUCTURES ON THE PATIENT’S IMMUNE-METABOLIC PROFILE
Yarina I. M.

The pathological effect of non-removable orthopedic structures (NROS) on the functional state of the epithelium of the oral cavity mucosa (EOCM) can be established on the basis of immune-metabolic parameters. In the study of metabolic processes occurring in the dental extraction system, biochemical examination of the oral fluid (OF) is of particular importance. The purpose of the studywas to study the effect of non-removable orthopedic structures on the periodontal tissue by performing an immunoassay oral liquid analysis at different stages of orthopedic treatment, depending on the method of preparation and the length of defects in dentition. The object and methods of research.In order to achieve the goal and determine the level of secretory immunoglobulin (sIgA) and indicators of the state of oxidative homeostasis (reversed glutathione (RG), superoxide dismutase (SOD) and catalase (CAT), an orthopedic treatment was performed for 112 patients divided into two groups depending on the chosen method of preparation – І (usual technique, 53 patients) and II (preparation with a symbol of a ledge, 59 patients). The biological substrate was the oral liquid of patients, which were collected on an empty stomach on stage I (before preparation), on II (after 5-7 days after the fixing of non-removable structures) and at III (in the remote period of orthopedic treatment). Research results and their discussion.After establishing a permanent orthopedic constitution (stage III), all groups of patients recorded an increase in the level of sIgA, but the most distinct changes occurred in patients who used the designs made according to the traditional method. At the second stage of the prosthesis in the group of patients who used the usual technique, the level of RG was significantly higher than in the group of patients who were trained with a symbol of a ledge (respectively (28,9 ± 0,6) mmol/L and (25,8 ± 0,3) mmol/L). A similar dependence was found in stage III in patients with replaced defects more than three units (group I – (34,3 ± 1,1) mmol/L, group II – (26,3 ± 0,6) mmol/L, p < 0,05). The study of superoxide dismutase content (SOD, mmol/L) in the oral liquid of patients during their orthopedic treatment stages, depending on the volumes and the applied method of preparation, revealed that the SOD index varied from (1359,0 ± 49,0) mmol/L to (1433,0 ± 37,0) mmol/L and significantly differed according to the NROS manufacturing methodology and total prosthetics. In general, it should be noted that at the stages of clinical monitoring of patients, there was a significant increase (p <0,05) in the content of SOD, which was more distinct among patients in group І. The study of the catalase content (СAT, mmol/L) in the oral liquid of patients during their orthopedic treatment stages, depending on the volume and the applied prosthetic technique, revealed that the KAT index varied from (4,02 ± 0,2) mmol/L to (4,18 ± 0,1) mmol/L and significantly differed according to the procedure. The revealed evidence indicates the maximum increase in the level of CAT in patients of all groups after the establishment of orthopedic constructions, which allows to determine exactly this enzyme as the most informative indicator of the reaction of oxidative homeostasis EOCM. Conclusions.A generalized analysis of immune metabolic changes in patients of the studied groups at the treatment stages revealed that the most informative is the growth of the relative content of catalase, as an indicator of functional rearrangement and activation of the enzymatic chain. In the third stage, the most prominent is the increase in the level of reduced glutathione content and the increase in the level of secretory immunoglobulin. The obtained results testify to various mechanisms of functional response of EOCM, depending on the stages of orthopedic treatment, which in general can be characterized as a compensatory reaction, which is manifested by the restructuring of the functional state of the enzymatic chain of oxidative homeostasis. Consequently, the application of the method of preparation with the symbol of the ledge, as evidenced by the data of the study, allows you to get not only a high aesthetic effect, but also qualitative biological integration of the NROS in the tooth-jaw system. Prospects for further research.An enzyme-linked immunosorbent assay provides an opportunity to assess the NROS effects on periodontal tissues, and further research will focus on finding ways to address this problem for improving patient quality of life. 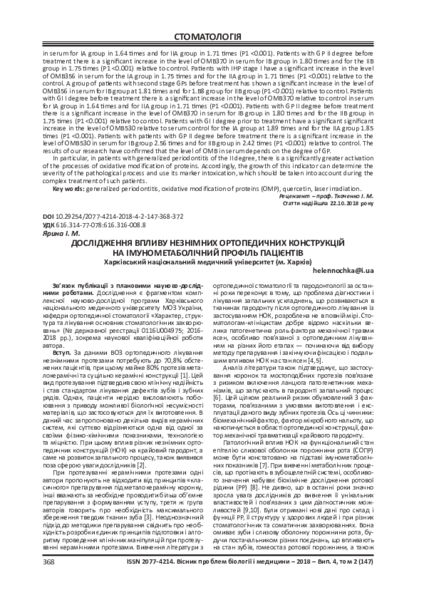