VIOLENT DEATH OF KYIV INHABITANT DURING REVOLUTIONARY EVENTS OF THE SOCIETY

Statistical indexes reasons of death are important and present the structure of death rate of population. In society the violent death is certainly related to framework of society and represents his stability and level of development. Generally known, that the murders considerably grows in the cases of cardinal changes of the state, when state control relaxes. The level of suicides in a country represents not only mentality and infused into religions, and is the index of social defense of population. Exactly social and economic vulnerability of population demonstrates the increase of level of suicides. An accident is the index of state control after strength security in society. The detailed analysis cases of violent death based on planning of prophylactic work of police and health protection for the removal of defects in organization of population help. The study of feature of violent death of Kiev residents became a research aim on a background the revolutionary events of 2004 for the improvement of prophylactic work of health and police assignments on reduction of frequency of cases of violent death in a population. Material of researches were results 43138 medico-legal researches of dead bodies, that died violent death in 2001-2015 and were investigational in the Kyiv municipal clinical bureau of medico-legal examination. 216 cases of violent death of Kiev residents were separately analysed for period of revolutionary events from 22.11.2004 to 02.2005. The analysis of the got results showed that an amount of the dead men in 2002-2007 had been about 1000 persons, and during next seven years diminished to 366-688 persons. For women analogical tendency was marked with maximal indexes at the level of 281-288 persons in 2001-2007 and reduction to their amount to 133-211 in 2008-2015. Depending on age the most of the dead men were in a group 30-60, substantially less 30 to and the least in age 60 over. Among women also the most dead was in age 30-60, and least in age 30 to. The index of level of violent death do not depends on a season. During all period among the dead violent death an accident predominated. Thus, 2008 to their amount was on relatively stable level, and did not exceed 656 persons. In 2009-2015 the decline of amount of the dead registered among this kind of death to 235-307. The amount of suicides had an a few another dynamics, in particular, the permanent decline of indexes registered in 2003 fates from 474 to 253 in 2015. The dynamics of amount of murders for this period too had analogical to previous tendency. The analysis of type of death showed that in 2001 there were most of the dead men through hanging, that made 235 persons and in future kept at stable level within the limits of 130. An autotrauma that has a clear tendency to the increase from 186 in 2001 to 282 in 2007 became predominating in other years. Amount of gunshot damages and action of sharp objects, as the fixed assets of commission of crime diminished for this interval of time. Gunshot damages 2014 to remained at insignificant within the limits of 10-15 cases stable level, however their amount in 2014 sharply grew to 106 cases with reduction to 33 next year. The analysis of influence of revolutionary events of 2004 showed on frequency of cases of violent death of residents of Kiev, that the lost men it was 177 persons, while women 29. Among them the kind of death were distributed as follows: murder –39, suicide –52, accident –115. Thus, research results showed that during moderate revolutionary events by the dead violent death 85% cases have men, there is substantial reduction to death among women and increase of cases of traumas by blunt objects and gunshot damages. In addition, in this period the amount of murders increases on 50% and his further falling to the level, that on 32% less than, than to the above-mentioned events. But the amount of suicides diminishes on 59% and insignificantly grows after events. 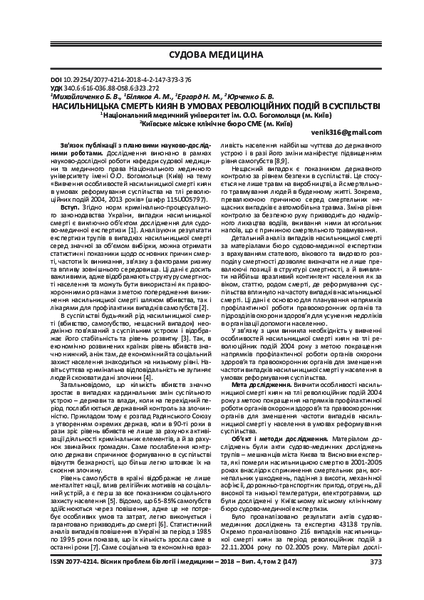