Bulletin of problems biology and medicine / Issue 4 Part 2 (147), 2018 / CHANGES OF INDEXES OF HUMORAL IMMUNITY IN THE CONDITIONS OF ACQUIRED MYOPIA OF DIFFERENT DEGREE
Kolesnyk Y. I., Sheiko V. I.

Currently acquired myopia remains the most common pathological condition of the visual system on the planet and it’s one of the main factors for the loss of vision and quality of life, due to its ability to rapid progression under the influence of adverse factors. According to literary sources, acquired myopia characterized by functional disturbances of immune system (suppression of the T-cell link of systemic immunity, increase of the concentrations of immunoglobulins different classes) and the development of secondary immunodeficiency. However, the majority of scientific works are devoted to the study of the immunity of myopes in childhood and adolescence. At the same time, state of the humoral link of systemic immunity in people with acquired myopia of different degree at the age of over 18 has not been studied. So, the purpose of our studywas to determine the features of humoral immunity in people aged 18-35 years with acquired myopia depending on its degree (low, medium and high). Methods and materials.Various parameters of humoral immunity (general amount of leukocytes, relative and absolute B-lymphocytes (CD22), the concentration of immunoglobulin classes A, M, G) were assessed in 60 healthy people (control group), 30 people with low, medium and high degree of acquired form of myopia in each experimental group. The absolute amount of the leukocytes was counted by the generally accepted method with the help of the Goriaev chamber. The leukogram was determined in the blood smears painted by the Romanowsky-Giemsa method, level of Blymphocytes (CD22) – in the reaction of indirect immunofluorescence using a set of monoclonal antibodies to markers of cell differentiation. The determination of the concentration of immunoglobulin A, G, M in serum was conducted by Manchini method in the radial immunodiffusion in the agar gel. Results and their discussion. We found out that the people with acquired form of myopia characterized by signs of leukopenia and relative lymphocytopenia that is the most pronounced in low and high degrees of myopia. The absolute and relative (p<0,05) amount of CD22-lymphocytes in myopes was higher than the indicators of control group; this trend, according to the literature, is an adaptive reaction that aims to compensate for the defect of T-cell link. High level of CD22-lymphocytes was accompanied by enhanced secretion of immunoglobulins. The data obtained testify significantly (p<0,05) increased of immunoglobulin IgA and especially IgM, lowering the level of concentration IgG in people with acquired myopia of low, medium and high degree in comparison with practically healthy people. At the same time, the content of IgM in myopes exceeded the limits of clinical standards. Disimmunoglobulinemiya, its level and the frequency, increases from low to high degree of myopia. Conclusions. Thus, the results of our studies testify the activation of humoral immunity in people with acquired myopia, which is manifested in the reliable increase of the content of B-lymphocytes with the CD22 phenotype and immunoglobulin-producing activity in comparison with healthy people. In our opinion, the evolution of these indicators can be a manifestation of adaptation to compensate for the presence of leukopenia and lymphocytopenia and defect of T-cell link of systemic immunity in myopes. Disorders of humoral immunity in people with acquired form of myopia have the character disimmunoglobulinemia (increasing the content of IgA and IgM, decreasing IgG), which strongly pronounced in people with high myopia. Overall, these changes in the studied parameters, according to literature data, are signs of dysfunction in systemic immunity and development in people with acquired myopia secondary immunodeficiency. Prospects for further research.In further research we will be continue studying of immune status of people with acquired myopia of low, medium and high degree. 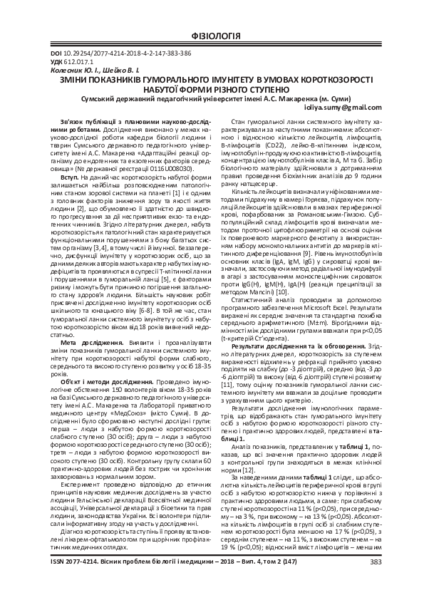