Bulletin of problems biology and medicine / Issue 1 Part 2 (143), 2018 / DYNAMICS OF GAS COMPOSITION AND COAGULATIVE PROPERTIES OF BLOOD IN PATIENTS WITH SEVERY TRAUMA BRAIN INJURY IN THE CARRYING OF THERAPEUTIC HYPOTHERMIA
Tsarev A. V.

The aim of the study was to study changes in blood gas composition and parameters of the hemostasis system in patients with severe TBI when performing therapeutic hypothermia in a complex of intensive care. Object and methods. The 24 patients were examined – standard intensive care, according to the “Guidelines for the Management of Severe Traumatic Brain Injury 4th Edition, 2016” in the treatment of the ICU and therapeutic hypothermia “Blanketrol II” (CSZ) with the use of non-invasive technology to achieve the target core body temperature (Tco) of 34.50C. Induction of therapeutic hypothermia was performed by intravenous drip as fast as possible infusion of 40C with a saline at a dose of 30 ml/kg, followed by maintenance of therapeutic hypothermia with the hypotherm “Blanketrol-II” through blankets with circulating cold water. In the induction phase, an analgesia and pharmacological prevention of cold shiver development. Induction, maintenance of therapeutic hypothermia, and warming of patients, the body core temperature was continuously measured by means of an esophageal temperature sensor connected to the “Blanketrol-II”. Criteria for the inclusion of patients in the study: the first 24 hours from the moment of receiving severe TBI (both with the carrying out without an operative neurosurgical intervention), the initial level of neurological deficit, which was assessed on the Glasgow Coma Scale (GCS), in the range of 5-7 points. Exclusion criteria were: age ≤18 years, neurological status on the GCS ≥8 and ≤4 points at the time of the study, pregnancy, refractory arterial hypotension using high doses of vasopressors. Patients of both groups were mechanically ventilated. Results. When analyzing the dynamics of the body core temperature at 24 hours, its decrease was noted from 36.4±0.390C at baseline to 34.28±0.230C, which was due to induction and maintenance of therapeutic hypothermia (p<0.05). At stages 48 and 72 hours, an increase in Tco was observed: 36.83±0.260C and 36.75±0.440C, respectively, thus reaching the baseline level due to the controlled restoration of the normothermy. In the analysis of PaO2 at 24 hours of observation, a significant increase in this index was found from 227.2±0.17 mm Hg initially to 261.4±0.25 mm Hg at the 24-hour research stage while maintaining the target therapeutic hypothermia value (p<0.05). Also, there was a significant increase in PaO2 at the 48 hour stage by 10.5% compared to baseline (p<0.05). In the study of the level of PaCO2, a significant decrease in this index was found from 35.7±0.28 mm Hg initially to a level of 32.3±0.31 mm Hg at the 24-hour stage (p<0.05). These changes are due to the fact that hypothermia lowering the metabolic rate, also contributed to a decrease in the rate of production of carbon dioxide. At stages 48 and 72 hours of observation, a tendency was found to increase the level of PaCO2 in comparison with the initial value, with this value being within the limits of normal physiological values. The study of the parameters of the hemostasis system revealed the following changes. There was a tendency to decrease the level of the prothrombin index from 86.5±2.7% initially to 81.4±3.2% at the 24 hours of the study, which was caused by neurosurgical interventions and intraoperative blood loss in a number of patients. Subsequently, there was an increase in the level of the prothrombin index at the 48 and 72 hours of follow-up, with the level of the initial value reaching the last stage, the changes also did not have significant differences (p>0.05). When analyzing the changes in the value of the international normalized relationship, a trend was observed to decrease this index at the 24-hour observation stage, compared with the baseline, which was also explained by intraoperative blood loss during neurosurgical interventions. At subsequent stages of the study, there was an increase in INR that reached the initial value at 72 hours. Similarly, a significant decrease in the level of fibrinogen was observed from 3.8±1.3 g/l initially to 3.2±0.6 g/l at the 24-hour study (p<0.05), with a subsequent upward trend the level of fibrinogen and reach the baseline level at 72 hours (3.9±1.3 g/l). Thus, the results obtained indicated that the use of therapeutic hypothermia in the intensive care complex did not cause significant changes in the coagulation system and did not lead to the development of coagulopathy, including in patients who underwent urgent neurosurgical interventions. Limitations of this work is a small sample of patients, which requires additional studies. Conclusions. Thus, the results of the study showed a good tolerability and safety of the method of therapeutic hypothermia used for neuroprotection in the intensive care in patients with severe brain injury. 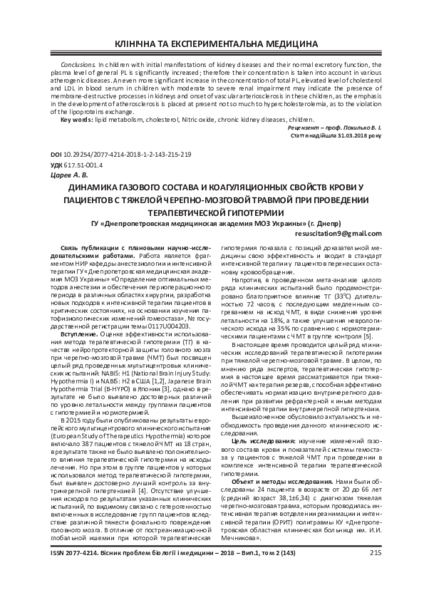