EFFICIENCY OF APPLICATION OF TUBULAR THORACOSTOMY METHODS IN THORACIC SURGERY

Purpose: comparative evaluation of the effectiveness of various techniques of tubular thoracostomy in thoracic surgery. Methods. The study involved 40 patients who, for various reasons, was carried out tubular thoracostomy in the Department of thoracic surgery of the Medical Faculty of Aegean University for the period from January to December 2010. The obtained results were evaluated with the help of EN2 analysis, Anova test and Shapiro-Wilk test, the study included patients who underwent tubular thoracostomy both during surgery (VTC and musculoskeletal operations) and under local anesthesia. The results of tubular thoracostomy performed along the middle armpit line were evaluated in the studies, and the fixation of drainage was performed only by the U-shaped seam. Before the operation, it is recommended to re-view the operating document of the patient, as sometimes during the operation there is a need to open an additional hole for drainage (especially if only one drainage was previously used). The patient is given detailed information about the operational intervention. He several times explained the breathing technique during the completion of the drainage (in particular, the Valsalva maneuver and Müller) to the complete mastery of the material. The patient is transferred to a sitting position and raises his hand above his head on the side of the procedure of tubular thoracostomy. Place the introduction of drainage is cleaned with disinfectants. After opening the seam above the drainage of the loose ends of the threads are strongly pulled up. Drainage gently extends outward. When approaching the last opening (approximately 4 cm), the procedure is suspended and the patient is offered to perform the necessary respiratory maneuver. After that, the drainage is rapidly removed and the seams are tied. The wound is disinfected, after which it is applied a dry swab. After removing the tube on the 6th and 24th hours, the condition of patients is assessed by pulmonary schedules. Results. The study involved 27 male patients and 13 female patients, the average age was 38.5 years. On pulmonary graphs taken after the end of tubular thoracostomy, one patient in each group with the completion of the procedure at the end of the inhalation and exhalation and two patients in each group during maneuvers Muller and Valsalva found expansion defect. In General, from 40 patients in 6 (15%) there was an expansion defect after removal of the tube. These patients underwent oxygenation therapy of 3l / min, control x-ray examination, after which they were discharged home within two days. After the end of tubular thoracostomy with the use of various methods between them in the number of identified complications we found no statistically significant differences (p=0.85). The incidence of expansion defect in the applied techniques was approximately the same in both groups of surgical patients. Conclusion. Expedient completion of the procedure, the tubular thoracostomy conventional techniques familiar to persons engaged in the modern practice of surgery. 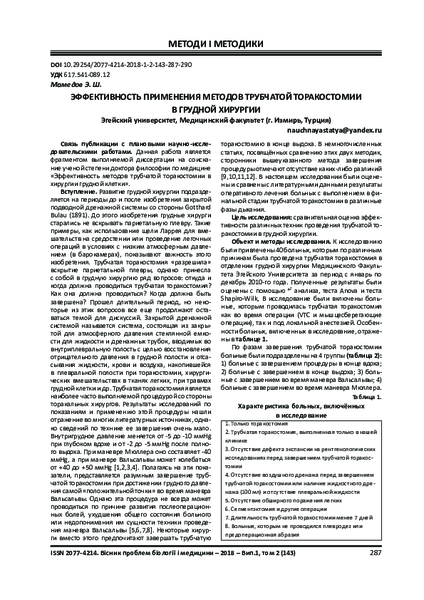