Bulletin of problems biology and medicine / Issue 3 (145), 2018 / THE VALUE OF RHINOMANOMETRY IN THE ASSESSMENT OF NASAL AIRWAY
Huseynov T. A.


THE VALUE OF RHINOMANOMETRY IN THE ASSESSMENT OF NASAL AIRWAY

Objective: assessment of nasal airway by means of rhinomanometry. Methods. The study was conducted after receiving the decision room 09/08-06 adopted 18.12.2009 Izmir by the Ethics Committee for Clinical Studies No. 3, in the offices of Ear, Nose, Throat and Biophysics of the Medical faculty of the University “Doggus Eylul” of the Turkish Republic for the period from January to July 2010. The study involved 35 patients admitted to the Ear-throat-Nose Department of the medical faculty of the University “Dogguz Eylul” of the Republic of Turkey with complaints of nasal obstruction, and who were diagnosed with nasal septum curvature using anterior rhinoscopy and elastic endoscopic examinations. 4 patients were excluded from the study, as the result of the test for the threshold of smell, conducted before the operation, they were ≤1. Patients who had received oral or topical steroids, had had acute bacterial or viral infections and sinusitis, had previously had nasal surgical problems, and suffered from allergic rhinitis were also not included in the study. The age of patients (10 women, 21 men) ranged from 19-61 years, the average age was 35.58 years. To assess nasal airway patients, tests were carried out front of an active rhinomanometry using Rinometrics 2000. The research component of the transport of odors to 8 weeks after septoplasty and after elimination of obstruction in the nasal passages, the healing of the mucous membrane, is the main task of our work. Before surgery the patients were performed the objective and subjective tests the patency of the nasal airway. When you run rhinomanometric measurements first need to be using the patch to fix the probe to measure pressure in the left nasal cavity, completely blocking the air intake. The patient puts on a transparent mask to see the openness of the nasal cracks, and, slightly pressing, he supports it. Once the right nasal passages have been measured, the left half of the nose is similarly measured. At the same time, the best volume of air during inhalation and exhalation is recorded in five dimensions. Results. The average peakflowmetry conducted before surgery and 8 weeks after it, were compared by t-test. Comparison of the resistance of nasal Airways before and after surgery method peakflowmetry showed a statistically significant increase. Note that peakflowmetry is the most widely used objective test to measure the peak rate of exhaled air. We chose this test because of its reliability, availability, simplicity and ease of execution. During the study in patients before and after septoplasty by t-test were compared the average values of the threshold of smell obtained by the test “Sniffin Sticks”. There were no statistically significant differences between pre – and postoperative parameters (p>0.05). After the test, the “Sniffin Sticks” using a t-test compared averages of the patients by the identification of odors before and after surgery. There was no statistically significant difference between the indicators (p>0.05). After the “Sniffin Sticks” test with the use of t test, a comparative analysis of patients ‘ average indices of odor discrimination before and after surgery was carried out, which did not reveal statistically significant differences between pre – and postoperative indices (p>0.05). Correction of nasal septum curvature is probably in the first place among the operations of modern plastic surgery. In nose surgery, first of all, you need to pay attention to the olfactory zone. Conclusion. The pre – and postoperative indices of the threshold of smell, identification and discrimination of odors obtained during the Sniffin Sticks test are not statistically significantly different. 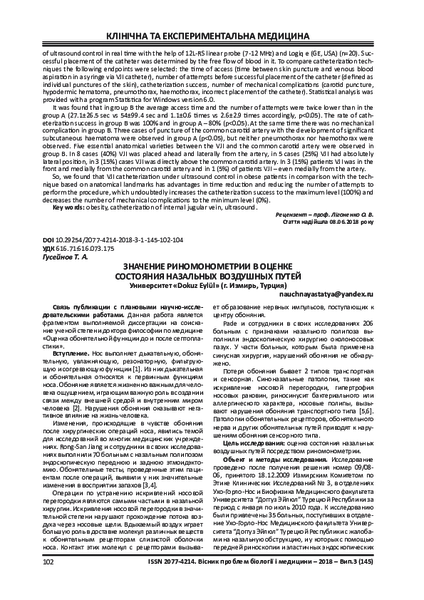