Bulletin of problems biology and medicine / Issue 3 (145), 2018 / POSSIBILITIES OF NEAR-INFRARED SPECTROSCOPY IN THE DIAGNOSIS OF NEONATAL NECROTIZING ENTEROCOLITIS
Makedonsky I. A., Yaremenko S. A.

Necrotizing enterocolitis (NEC) is one of the most common acquired diseases of the newborn’s gastrointestinal tract, occurs in 1-5% of children in neonatal intensive care units and in 10% of newborns weighing up to 1500, is the leading cause of death among gastrointestinal diseases in premature infants. There remains a high mortality rate among the operated newborns from 20% to 60%, and with total necrosis of the intestine reaches 100%. The most important diagnostic problems of NEC are the low diagnostic significance of clinical, instrumental and radiologic signs in the early stages of the disease, which are the main ones in the diagnosis of this disease, the lack of adequate biomarkers that help determine the stage of the disease, the spread of bowel disease, or differentiate NEC from other clinically similar conditions. Non-invasive methods for studying changes in the intestinal hemodynamics, its perfusion in dynamics in real time can help in the early diagnosis and diagnosis of NEC stages. We studied and evaluated the possibilities of abdominal infrared spectroscopy (NIRS) in the diagnosis of NEC assessing the nature of the course of this disease. The study group of 52 children aged 0 to 38 days, with a body weight from 630 to 2700, gestational age of 28-38 weeks with suspected NEC and various stages of NEC, who were treated in Regional center of Children’s and Mother’s Health, Dnipro, Ukraine from 2013 to 2017. All children underwent conventional diagnostic methods according to the NEC treatment protocol. In addition, the studies were supplemented by measuring the abdominal regional saturation of tissues with oxygen, using an optical spectroscopy system (INVOS, Covidien) In-Vivo with two somatic A-rSO2 sensors. The obtained results of the study are presented in the form of arithmetic mean value and standard deviation of arithmetic mean value – M + m. The normal A-rSO2 values in the control group ranged 74 ± 13%. The critical level of A-rSO2, which determined the disturbance of blood flow, as well as damage to the intestinal wall was ≤ 60%. The value of A-rSO2, which was less than the normative by 10%, was informed of the high risk of developing circulatory disorders in the intestine. The A – rSO2 indices, which were 20% less than the normative ones, indicated the development of circulatory disorders in the intestine. The A-rSO2 values, which were less than the normative by 40%, for a long time (≥ 6 hours), were highly informed about total or subtotal necrosis of the intestine. It was established that the lower the level of A – rSO2, the deeper the pathological process in the intestine. The results of the study indicate significant differences in the visceral regional oxygen saturation of tissues in term infants with NEC and functional abnormalities of the gastrointestinal function. The use of abdominal close-infrared spectroscopy in the diagnosis of NEC allows non-invasive monitoring of early changes in mesenteric hemodynamics in real time, differential diagnosis of NEC with functional gastrointestinal disorders, and timely initiation or intensification of treatment. NIRS is a sensitive non-invasive method for diagnosing NEC, easy to use, has great practical value in assessing the effectiveness of conservative therapy, determining the surgical stage of the disease and predicting its outcome. 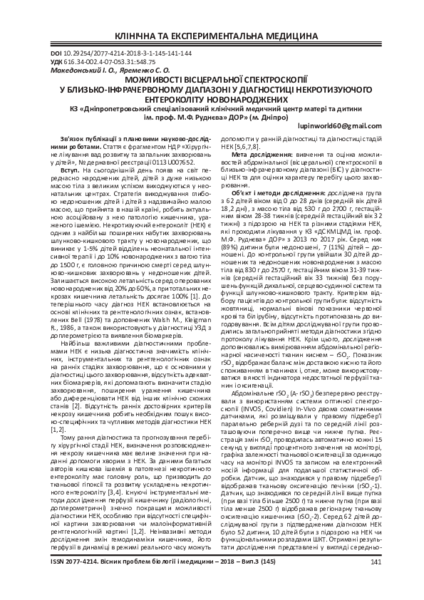