Bulletin of problems biology and medicine / Issue 3 (145), 2018 / RESEARCH OF THE MORPHOLOGICAL CHANGES IN THE EYES OF PATIENTS WITH CATARACT WITH SYNDROME OF THE SHALLOW ANTERIOR CHAMBER
Rykov S. O., Lavryk N. S., Shulezhco I. A., Gurgy Y. M.

In the literature, there is indications that the mutual mismatch of the parameters of the structures of the eyes, namely: combination of a thickened lens and a short anterior-posterior axis- leads to a violation of the normal morphology of the anterior segment of the eye apple, which was determined by genetic factors. However, so far, is not enough studied changes in the morphology of the structures of the anterior part of the eye, as well as conditions that determine the dynamics of intraocular pressure in the eyes of a shallow AC. It determines relevance to research structures in the eyes with the syndrome of the shallow anterior chamber (SSAC). At SSACs have some difficulties when performing phacoemulsification cataract (FEC), as noted by L. Buratto (1999), which is related to lack of sufficient space for manipulation, as well as with the action of physical factors. The analysis of literature sources has shown that the question of the influence of the initial anatomical-morphological state of the eye, the depth, and the width of the AC on the formation postoperative clinical indicators remains unresolved. Object and methods. For the study of anatomical and morphological characteristics of indicators were examined 94 eyes (94 patients with cataract in aged 50 to 99 years, 41 people, 53 women). After bio microscopy the determination of the morphometric parameters of the eye (PZVAC, L and V) was carried out by the method A-Scan on the “Axis” device (“ALCON”), AC parameters were determined on “Orbscan” instrument, optical coherent tomography and gonioscopy (Goldman). 3 groups of eyes were allocated: Group I – PZV> 24 mm – 7 eyes, (7 patients); Group II – PZV < 24 mm; at the depth of the anterior chamber (AC) – > 2.8 mm – 52 eyes (52 patients); Group III – PZV < 24 mm; at a AC depth < 2.8 mm – 37 eyes (37 patients). Comparison Group – 20 eyes of healthy persons of the same age. Results. When analyzing biometric indicators it is seen that the parameters of the eyes of group I (large eyes) significantly differed from the control group (p <0,05). In group II (eyes, conditional, proportional) only the size of the lens was different – L (p<0,05) from the control group. In group III (SSAC) biometric indices differed significantly from the control group, group I and group II (p<0,05). ELVs in groups II, III, control – essentially not differed (p >0,05), thus, according to the average data, was not defined “short” eyes. The thickness of the cataract lens was the largest in group III (p<0,05). To characterize proportions that present in the eyes of patients with cataracts, and may have been formed in the process cataractogenesis, correlated in group III in the eyes of the SSAC ratio the depth of the AC (AC) and the lens (L) with the depth of the vitreal cavity (V). Most significant the difference in relation to the depth of the cavity of the vitreum was observed in group III. It is noted that the depth of the cavity of the vitreum (V) is 5.73 times greater, than the depth of the AC. This is significantly higher (p<0,05) than in other subjects in groups: group 1 – in 4.70, group II – in 4.75, control – in 4.65. As the cause anatomical imbalance due to an increase in the parameter V (vitreum), we can assume the accumulation of liquid behind the iridocrystalline diaphragm, which is pathogenetically associated with the possible development of facomorphic glaucoma. But this factor – a noncompressible liquid substance – can affect the performance of the FEC in the eyes of the shallow front camera. The parameters of opening the angle of anterior chamber are determined by the OCT method (AAC). The value of the indicator varied in the eyes of the SSAC groups III from 4.9 to 18.1 degrees, on the average, – 13.07+4.30 degrees. In the eyes of group II – from 11.71 to 25.60 degrees, on average, – 17.20+5.30 degrees. (p<0.05). The indicator of group III by 20.6% differed in group II (p<0,05). In the eyes of in group III marked closed AAC in 29 eyes (83%), open narrow AAC – in 6 eyes (17%), single goniosinehias were identified in 9 eyes (26%). These indicators characterizing the features of the structure of the anterior chamber of the eye patients with cataract with SSAC, differed (p < 0.05) in comparison with indicators of “proportional” eyes of group II. According to indicators, reducing parameters: Depth of AC, AC angle, show limitations for manipulations in the AC in the eyes of the SSAC, and a closed angle of 83% of the eyes testifies to development of conditions for violations of hydrostatics and hydrodynamics. The study of the endothelial layer of the cornea was performed on 37 eyes that were included in the group III (SSAC) (depth 2,63+0,05 mm), with the help of endothelial microscope SP-3000P (Topcon, Japan) with the program CellCount. In the eyes of SSAC before surgery features of EK cornea, which testify to more significant changes in ECV compared with a certain age level. The dependence of the postoperative density of the endothelial layer on the depth of the anterior chamber is determined – r=0.54, (p<0.05); the density of the endothelial layer of the cornea before the operation – r=0.63, (p<0.05) and loss of endothelial cells from the density of the endothelial layer of the cornea before the operation – r=0.51, (p< 0.05). Conclusion. Therefore expedient development receptions in the performance of the FEC, aimed at reducing possible complications. 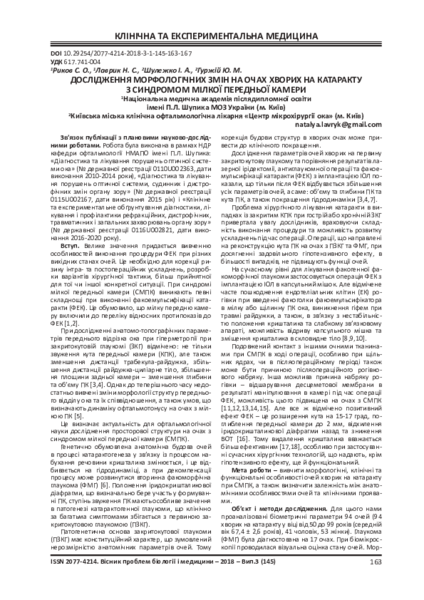