Gastrointestinal failure syndrome has been seen as intestine function suppression below the minimum needs for absorption of macronutrients and / or water and electrolytes, that requires intravenous supplements for the health and / or growth. Violation of motoric, secretory, absorption and barrier functions of the intestine leads to the development of systemic organ failure syndrome. Newborns should be considered as a contingent of patients who are prone to the development of the gastrointestinal failure syndrome, and to implementation of the multiple organ failure syndrome. Morphological study of changes in the gastrointestinal tract and its correlation with morphological pattern of other affected organs may be the basis for understanding the mechanisms of pathogenesis in patients in critical conditions, particularly – in infants. Purpose: determination of the morphological and functional parallels between changes in the gastrointestinal system and the formation of the systemic lesions in infants who need intensive care. Object and methods. A study was performed at histological material of preserved cadaveric tissue of the wall of small intestine, brain, lung, myocardia, liver, kidneys, thymus, spleen of that was belonged to 14 infants who died from the effects of perinatal pathology in intensive care units. Results and discussion. The 14 infants who died during intensive therapy, among pathological changes of the intestinal tube most frequent pathologies were edema, paresis and plethora vessels (8 cases). The second place on frequency of appearance took changes in the form of inflammatory infiltration and desquamation of mucosal epithelial layer (4 cases). Third place on frequency among pathological changes took bleeding in the mucosa and necrosis of the intestinal wall layers (3 cases). A statistically significant differences in the pathological manifestations of the pathology of the gastrointestinal tract in infants who died from the effects of asphyxia at birth and infants who died from the effects of prenatal infectious diseases were not found. Similar changes were found in other organs and systems. These results suggest that the development of multiple organ failure syndrome in infants depends on the formation of the syndrome of gastrointestinal failure. Also, it is evidence of the same universal pathogenetic mechanism, which results in the formation of long-term signs of dying, severe tissue hypoxia and alteration. The presence of inflammatory infiltration of tissues on the background of expressive atrophic changes in the immunoprocessing structures in form of accedental transformation of thymus and spleen pulp reduction indicates a basis of immune organ lesions in infants who die during intensive care. Conclusion. The study of gastrointestinal tract in infants who died during intensive care made possible to identify the main pathogenic mechanisms of gastrointestinal destruction and proved that these mechanisms are universal for forming systemic lesions. 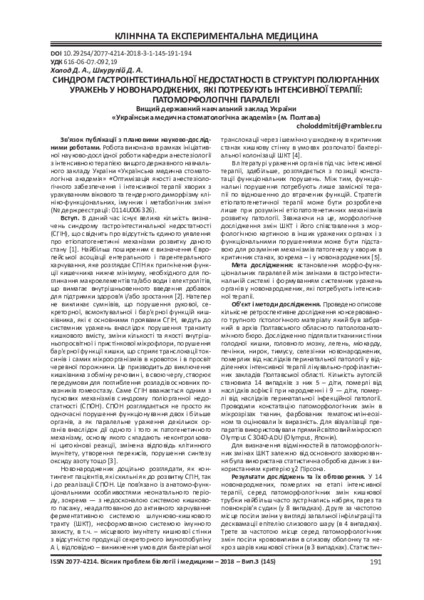