Bulletin of problems biology and medicine / Issue 3 (145), 2018 / EVALUATION OF THE INFLUENCE OF CADMIUM CHLORIDE ON THE RAT EMBRYOGENESIS INDICATORS IN THE CONDITIONS OF CORRECTION BY ZINC CITRATE DURING INTRAGASTRIC ADMINISTRATION
Nefedova E. A., Zadesenets I. P.

The problem of environmental pollution by heavy metal compounds remains relevant at the present time. Among the latter, lead, cadmium and mercury deserve special attention. The rapid development of technology significantly increases the human-made impact on the environment and, as a result, worsens human health. Cadmium is a heavy metal that does not have known physiological functions in the human body. The toxic effects of cadmium on the adult organism are well described in native and foreign literature, but data on the influence of the latter on prenatal ontogenesis remain scattered. The search for biological antagonists that could reduce the toxic effects of cadmium at the stage of prenatal and postnatal ontogenesis is an actual task of the present. Known antagonists of toxic effects of cadmium according to the literature are zinc-containing preparations. The purpose of our study was the experimental determination of the effect of low doses of cadmium chloride separately and under the conditions of correction by zinc citrate (nanoacquchelate form of zinc) on the overall course of embryogenesis of rats with intragastric administration. Determination of the potential embryotoxic effect of cadmium chloride separately and under cadmium citrate correction was performed by calculating and comparing the standard indices of embryonic development, namely, the average number of fetuses, total embryonic mortality, pre-implantation embryonic mortality, and post-implantation embryonic mortality. The determination was carried out on the 13th and 20th day of embryogenesis. For the study, young female rats of the Wistar line with a weight of 170-200 g were used. The experimental animals were divided into 3 groups (control, cadmium chloride group, cadmium chloride + zinc citrate). From the first to the nineteenth day of pregnancy, females received saline or cadmium chloride, or cadmium chloride + zinc citrate according to the group. On the 13th and 19th day of pregnancy, females were sacrificed under thiopental anesthesia. Fetuses were weighed and fixed in a 10% formalin solution for further morphometric studies. Counted the number of resorptions, live and dead fetuses in each uterus horn and corpora lutea in the ovaries of the corresponding side. Our findings indicate a pronounced embryotoxic effect of cadmium chloride, which is manifested by significant changes in the following indices in pregnant rats: a decrease in the number of live fetuses per female, an increase in total embryonic mortality due to preimplantation mortality in rat embryos. During assessment the combined effects of cadmium chloride and zinc citrate, it should be noted that the use of zinc citrate led to an increase in the index of live fetuses per female by an average of 16.2% (p <0.01), a relative decrease in total embryonic mortality by 2.2 times (p <0.01) compared with the cadmium chloride group due to a relative decrease in preimplantation mortality by 2.5 times (p <0.05) compared with the cadmium chloride group. Thus, the use of zinc citrate in conditions of cadmium intoxication reduces the negative effect of cadmium on the indices of embryonic lethality in rats. 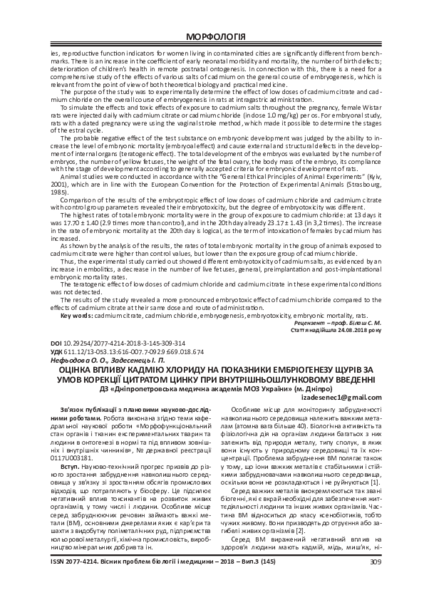