ARE EFFECTIVE MASS FLUORESCENCE STUDIES OF THE POPULATION WHEN DETECTING PULMONARY TUBERCULOSIS?

The relevance of the study is determined by the fact that, despite the general trend of reducing the incidence of tuberculosis in Ukraine, the problems of under-reporting of tuberculosis are topical. According to WHO, about 20% of cases of tuberculosis in Ukraine remain under-exposed. The practice of a mass fluorography survey among the general population for the detection of tuberculosis is inefficient, expensive and impractical from the economic point of view at the moment. The aim of the work is analyze the indicators of the population in the Zaporizhzhya Region with a preventive fluorographic survey and indicators of TB incidence at the expense of this method for the period 2013-2017. It was found that the coverage of the fluorographic survey is from 3461.49 to 4022.71 per 10 000 population. At the same time, for the identify one patient with tuberculosis, it is necessary to irradiate 5,000 pensioners, 2,702 workers in industrial enterprises, 2,857 workers in the public sector, and 353 unemployed working-age children. Defined, that for the period 2013-2017, the specific gravity of the detected pulmonary form of tuberculosis from all examined is 0.02-0.04%, which is a very low indicator. The article is disclosed the understanding that the mass prophylactic fluorography examinations of the population for the purpose of tuberculosis detection make a significant contribution to the collective dose of exposure for the population. So, the structure of X-ray diagnostic manipulations, fluorography is 29-36% in the Zaporzhzhya Region. For the period 2013-2017, the annual individual effective dose due to X-ray diagnostic procedures increased from 0.9 mSv to 1.02 mSv (collective dose varies between 1620.5-1759.0 p.). Based on the results of the analysis, the risk of diseases associated with the effect of ionizing radiation is calculated – neoplasms, diseases of the blood and blood-forming organs, neoplastic anomalies (developmental defects) – from all X-ray diagnostic procedures are 118-128 cases per year, the share of fluorographic examinations is 25-30 cases in the Zaporzhzhya Region. A risk factor was used in the calculations of the risk, which was given in the ICRP Publication 103. The results of the analysis of the coverage of the population by fluorographic examination and incidence rates for pulmonary tuberculosis for the period 2013-2017, and also taking into account the probability of occurrence of negative consequences from the effect of X-ray irradiation, confirm that a mass fluorographic examination among the general population for detection of tuberculosis is ineffective. For the recommendations of the WHO, it is more expedient to use the X-ray fluorography method of examination in high-risk groups for tuberculosis, which are determined for each country, taking into account the characteristics. Today, if there are symptoms of tuberculosis or attribution to a high-risk group, you should contact your family doctor for further examination, including using an X-ray fluorography screening method.

fluorography, risk of exposure of the population, tuberculosis 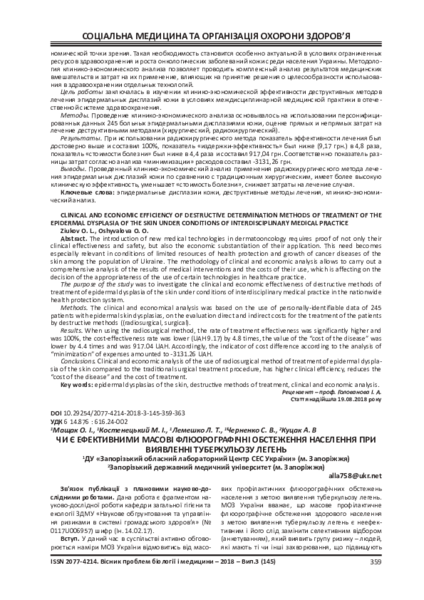