This article analyzes the main methods of prevention and treatment of inflammatory complications of third molars surgery, which were recorded in professional literature to 2013 inclusive. Established that more than 65 % of patients in the postoperative period complain of pain, limitation of mouth opening, difficult eating and psychological discomfort. An important role for the improvement of the patient plays an adequate intra- and postoperative measures of accuracy and consistency of which depends on the duration of the rehabilitation of the patient. Such measures of treatment of inflammatory complications after third molars surgery include different surgical techniques: modified accesses to atypically placed wisdom tooth, ways of traction and suturing wounds, leaving drainage, the use of drugs such as analgesics, steroids and antibiotics, physiotherapy techniques such as hypothermia, laser or a combination of known methods. The aim of study: detailed analysis of all known methods of treating inflammatory complications, indications and contraindications to them, with emphasis on their advantages and disadvantages. The object of study: domestic and foreign scientific publications in professional journals until 2013 inclusive. Results. The main advantages and disadvantages of methods, including the most commonly used oral surgery (to reduce injury to the surrounding tissue), draining wounds, different groups of drugs and physical therapy. Particularly acute problem of postoperative therapy is seen in outpatient dental surgery because after surgical manipulation of the patient is not under the supervision of a physician, because medical therapy is aimed at preventing any possible complications. But the side effects caused by these drugs are serious and dangerous, including gastritis, gastric ulcers or intestinal, gastrointestinal bleeding, allergic skin reactions, bronchospasm, bleeding disorders, liver and kidney water-salt metabolism in the human body which creates an additional burden on the heart. Moreover, among the complications of NSAID prescribing diagnosed stomatitis, gingivitis, glossitis, cheilitis, ulcers of the oral mucosa. Similar changes, but of course more difficult, was observed after steroids therapy, which causes suppression of the immune status and can cause of ulcers of the oral mucosa and gastrointestinal tract, developing dysbacteriosis, candidosis and piodermiya. Therefore, despite the presence of a wide arsenal of high medicinal products used conventional treatment, which does not always produce the acceptable results. It was found that all methods of prevention of post-operative pain, swelling and trismus is effective to varying degrees, as evidenced by the results of experimental and clinical research scientists from different countries. The authors analyzed the traumatic factor of third molars surgery and the effect of antibacterial drugs and corticosteroids on pathogenetic links inflammation and found that not all of these drugs completely prevent the development of these complications, as a more efficient method of treating of inflammatory complications of third molars surgery remains a pressing issue of contemporary maxillofacial surgery. 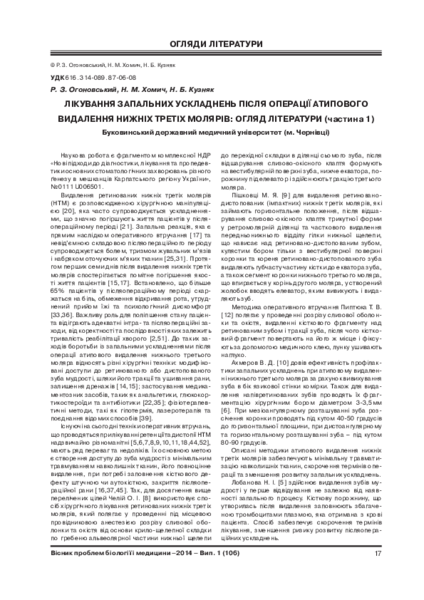