According to current tendencies, reproduction of domestic animals occurs mostly in open populations. They are characterized by a continuous exchange of genetic material between different populations, leading to gene flow and rapid changes in the genetic structure. Some breeds, such as the great white, belong to transnational commercial ones, Welsh and Ukrainian meat breeds are genealogically related and represent an interesting model to study microevolution processes in families and lines of breeds, especially concerning the genes of economically useful traits. To this end, we used polymorphisms of estrogen receptor gene (ESR). Estrogen receptor gene ESR is one of the major genes, polymorphism of which is associated with reproductive qualities of pigs. The aim of this work was to analyze micro-population processes based on genetic polymorphisms of estrogen receptor gene ESR in three pig breed families (Large White, Ukrainian meat, Wales). Material and methods of research. The material for the study served the hair follicles of sows of Allye, Volshebnytsia, Gvozdyka, Snizhynka, Soya, Taiga, Ch. Ptychky, Tsenzura, Tsetsera, Tsilina, Tsaplia, Tseremonia, Emma, Like Girl, Like Maid, Impozing, Don Mist families, Large White breed (LtD “Agrokombinat” Kalita”, Brovary district, Kyiv region), Ukrainian Meat (n = 73) and Wales (n = 123) breeds in DP DW “Hontarivka”, Vovchanka district, Kharkiv region. In the study of hair follicle, the initial lysis phase was performed for 2 hours at a temperature of 650С. DNA concentration was assessed by electrophoresis in 2 % agarose gel and with the help of spectrophotometer. Analysis of studied gene polymorphisms was performed by PCR-RFLP Results and discussion. As a result of studies, they were henotyped sows of three breeds, investigated actual and expected heterozygosis and Wright’s fixation index for every family. If the expected heterozygosis, determined on the basis of the detected allele frequency, in most families was approaching the maximum (0. 5), ranged from 0. 32 (Beatrice) to 0. 49 (Tsapli), 0. 5 (Tselina), the actual heterozygosis was 0. 4 - 1 (Beatrice and Tselina families). Analysis of polymorphisms within different species suggests that families of Welsh breed are characterized by higher frequency of allele A than for other species. The frequencies of allele A in this breed ranged from 0. 5 to 0. 69. This indicates a consolidation of the studied families of Welsh breed pigs and illustrates that typical meat breeds are characterized by higher allele A frequency. It is interesting to note the high actual level of heterozygotes (from 0. 53 to 1). Ukrainian meat breed, genealogically related to the Welsh breed of pigs, was characterized by lower frequencies of A allele (from 0. 41 to 0. 62). Families of Large White breed had a wider scope of A allele frequencies (0. 2 to 0. 67), and, therefore, higher frequency of allele B (0. 33-0. 625) when compared to other investigated breeds, since Large White breed is used as a parent and allele B is associated with reproductive qualities and is competitive with respect to allele A, which causes the fattening qualities. Thus, in pig micro-populations it constantly takes place recombination of competitive alleles A and B, which are economically beneficial. Actual heterozygosis of Large White breed families was within 0. 4-0. 75. Overall, the frequency of allele A ranged from 0. 2 (Beatrice family) to 0. 69 (Impozing family). The frequency of allele B was within 0. 31 - 0. 8. Thus, the limits of allele B frequencies were generally higher when compared to allele A frequencies. Wright’s fixation index was less than zero in all surveyed pig families. This suggests that the actual frequency of heterozygotes was greater than theoretically expected in all families. Thus, in families of Welsh breed, Wright’s fixation index ranged from -0. 1 to -1.0 (Don Mist and Emma families). Ukrainian meat breed was characterized by Wright’s fixation index in the range from -0. 47 to -1. Large White breed is characterized by a narrower value range of Wright’s fixation index (from -0. 067 to -0. 67) when compared to other breeds. Summary. All studied families of Ukrainian Meat, Large White, Welsh pig breeds suggest that all of them were polymorphic according to estrogen receptor gene. The frequencies of alleles and genotypes reflect micro-population processes caused by competition of economically useful alleles (A and B), fluctuations in the level of heterozygosis directed, more likely, to its increase in result of selection. Overall, the revealed picture of polymorphism confirms the benefits of estrogen receptor gene heterozygotes in comparison to homozygotes AA, which due to low reproductive qualities are thrown out at the stage of examination. 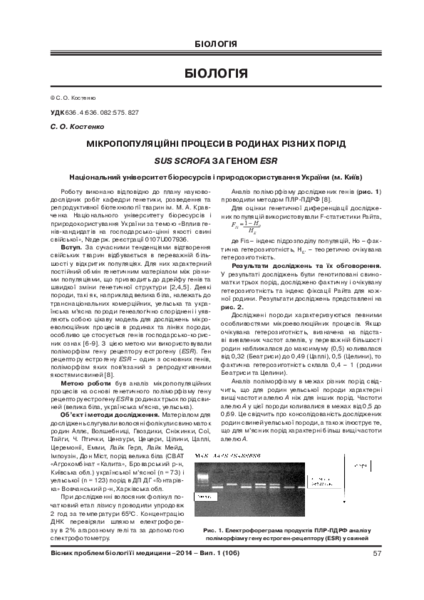