Introduction. Respiratory diseases in premature newly-born babies are still one of the serious prob- lems of intensive therapy. Prematurity and apparent morpho-functional immaturity, old perinatal hypoxia are the major risk factors for development of severe pathology not only from the aspect of respiratory apparatus. The purpose of the research is to define the correlations indices of central, pulmonary and cerebral hemody- namics in premature newborns, depending on the type of respiratory support. Methods and materials. 125 premature newly-born babies have been studied. They received treatment at new- borns’ intensive therapy department of Kharkiv city perinatal center during the period of 2007-2010 years. results. Indices of cerebral blood flow in anterior cerebral artery in spontaneous breathing premature newborns correlate with values of pulmonary resistance index and end-systolic volume of aortic ventricle. It can be asserted that, conclusively, mechanisms of automatic cerebral blood flow control in premature newborns is not mature, since they are dependent on indices of systemic and pulmonary blood flow, or rather the state of total peripheric and pulmonary resistance. Once intensive therapy finished a qualitative change of correlative relationships of hemodynamics indices occur, where the strongest interactions between the indications of blood flow in anterior cerebral artery and state of pul- monary hemodynamics is observed. With the purpose to make the character of functioning of «hemodynamics» system more precise in different conditions (various types of respiratory support before and after intensive therapy), the analysis of labialization co- efficient (LC) and mean correlation coefficient (MCC) has been carried out. Intensity of correlation relationships is the highest among the indices, registered before intensive therapy, which confirms the hypothesis that the more a system’s stimulus strength (stressor) is, the higher integration between system element is observed. In spite of the fact that among correlation indices in infants with respiratory distress-syndrome of the I and II group were of multiple differences, they have low integration of correlation system, which makes compensation exhaustion or «saving» functioning of organs in condition of deep stress evident. At the initial intensive therapy in- teractions between sub-systems and individual elements is becoming more multiple, i. e., programs of regulation of adaptive processes, led to organism survival, are activating. conclusions. At the newborns’ intensive therapy departments, premature babies require dynamic echodoplerocardiographic monitoring to estimate the state of central, pulmonary and cerebral hemodynamics. Having examined the relationships between indices of cerebral, pulmonary and central blood flow in premature babies with respiratory distress syndrome both before and after intensive therapy, it may be concluded that the general functioning of hemodynamics is different in various types of respiratory support, which are prospects for further studies. The prospects of further investigations should be the study of correlations of indices of central, cerebral, pul- manory, mesenteric, renal hemodynamics in premature newborns with respiratory distress syndrome, undergoing noninvasive pulmonary ventilation and spontaneous breathing under positive pressure. 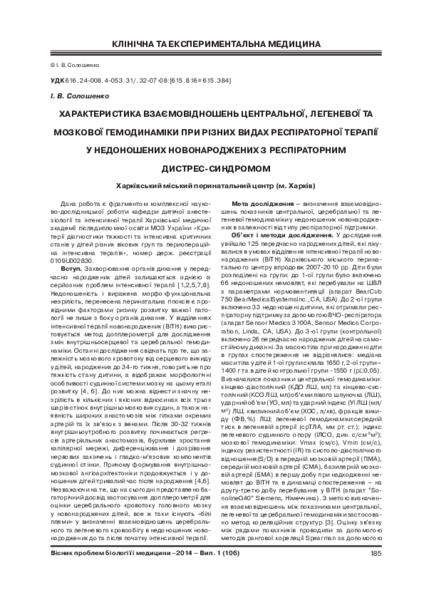