Bulletin of problems biology and medicine / Issue 1 (106), 2014 / Changes in the Histological Structure of the Internal Organs of the Reproductive System of Immature Rats after Inhalation Exposure to Toluene
Voloshina I. S.

In recent years, research attention is increasingly paid to the problems associated with the morphol- ogy of the reproductive system both in normal and under the influence of various factors in the experiment, because the reproductive system is sensitive to any changes in the environment. Human contact with chemicals also occurs in the home with some consumer goods, while in the new homes, where they can accumulate volatile components of building materials. One of these pollutants is epichlorohydrin (ECH). Sixty male laboratory albino rats were obtained from Lugansk State Medical University Laboratories (Lugansk, Ukraine). When received, the subjects were 12 weeks of age and weighed 130-150 g. The test animals were ex- posed to target concentrations of 0 (air control) and 10 mg/m3 of toluene in air for 5 hours/day, 5 days/week, for 2 month. Each series of animals was divided into five groups (6 rats each) in accordance with the term of output animals from experiment 1, 7, 15, 30 and 60 days after cessation of exposure of toluene. At the end of the experiment the animals were weighed on laboratory scales and taken out of the experiment by decapitation under ether anesthesia Authorities confiscated a single set of surrounding adipose tissue and weighed with an accuracy of 1 g by laboratory scale ВЛА-200. Organs fixation was performed in 10 % neutral formalin solu- tion, followed by washing in running water and dehydration in increasing concentrations of alcohol battery by com- monly accepted method. Material embedded in paraffin blocks. Sections obtained thickness 4-5 mm. Staining was carried out with hematoxylin-eozin. Numeric data for each series A p value of < 0. 05 was regarded as significant. Statistical analysis was performed by the Statistica for Windows 6. 0 software. The diameter of the seminiferous tubules is significantly reduced. So, on the first day after the termination of the ECH in rats of group 1 tubule diameter was 214. 12 mm, which is 19. 3 % lower than in the control group (p = 0,007). Currently are decreases and the thickness of the epithelium of the tubules. For example, in the 2 groups of animals and the series is equal to 135. 14 m, compared with the data it controls below to 25,39 % (p = 0,004). The Leydig cells relative number and diameter cores also significantly different from that of the control series. The relative number of Leydig cells in the animals of groups 1 and 2, and the series was less respectively 23,04 % (p = 0,01) and 22,56 % (p = 0,001), and the diameter of the nuclei of these cells – at 17. 16 % (p = 0,001) and 17,01 % (p = 0,003). Index of spermatogenesis is also significantly different from control values. After the cessation of inhalation action of ECH on epididymis in mature rats 1, 2, and 3 groups were observed tubules without the presence of sperm and tubules with eosinophilic conglomerates inside with dilated lumen. The maximum diameter of the lumen of the duct deferens is increases and the thickness of the epithelium, on the contrary, decreases. At 7 and 15 days after cessation of inhalation rat ECH appropriate action groups had duct lumen size – 292. 64 and 277. 03 microns, more data control series in 14,21 % (p = 0,047) and 13. 75 % (p = 0,01). In the rat prostate in experimental series 1, 2 and 3 groups were marked by interstitial edema, the devastation parts of the secretory glands, glandular epithelial desquamation, accumulation of cells in the lumen of the depart- ments, a significant decrease in the height of epithelium and vacuolization of interstitium of prostate. The height of the epithelium of seminal vesicles of rats during experimental series varies considerably. In the first three terms (1, 7, 15 days) observed a maximum decrease of this index in rats exposed to ECH in the experiment. Finally, the study shows that under the influence of ECH developing disorders of the endocrine animal’s status manifested in the inhibition of spermatogenesis at the level of formation of spermatids. Gonadotoxic action of ECH appears to reduce the number of sperm cells. Changes in histological structure of the prostate and seminal vesicles are characterized by metaplasia of the epithelium, massive exfoliation of cells and interstitial edema. 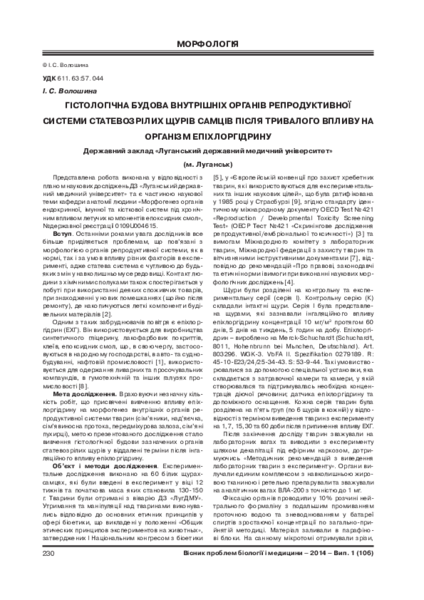