Bulletin of problems biology and medicine / Issue 1 (106), 2014 / Morphological Features of Human Heart during Prenatal Ontogenesis
Demyanenko I. A.

In the early post-embryonic period of heart ontogenesis we watched the active development of the stromal elements. This led to the fact that the specific volume of the connective tissue layers reached 10 % of the total myocardial capillary lumen and occupied 11 % of the tissue volume. Similarly varied as numerical density of endothelial cells and fibroblasts: active proliferation of these cell components in the stroma conditioned the intense build up in the ventricular myocardium early human fetuses. At the end of the early fetal period, there was a change of myocardial tissue organization, relief of cardiac cavities, the degree of development of the terminal vascular bed. Thus, the thickness of the inner layer of myocardial trabeculae increased significantly, intertrabecular space, penetrating into the interior of the myocardium, combined with the ventricular cavities narrow anastomoses, while significantly decreasing their number and size compared to the previous age group. Active development of the connective tissue component of the myocardium in the early period of the fruit has determined the organization of contractile cardiomyocytes into densely packed muscle bundles, specific volume, which accounted for 65 % of the attack, that is, those values that are characteristic for the heart of 40 -week-old human fetuses. The results of calculations myocyte – stromal ratio showed that the sharpest decline occurred in the embryonic period of development. In the early period of the fetus rate of descent values myocyte – stromal ratio dropped significantly, and during the fetal period average value stabilized at 1. 86-1. 94. During the late fetal period of gestation again there was a decrease myocyte – stromal index due to the active development of connective tissue elements, including vessels GMTSR. Definitive level myocyte – stromal ratio was achieved in the heart of a 36- week fetuses. Conducting morphological and mathematical analysis of research results allowed to make a quantitative assessment of various structural and functional changes of parameters of the human heart, and to establish the nature and extent of their interaction at different stages of ontogenesis. Using anatomical slices in the clinic, their comparison with scans obtained during fetal echocardiography, extends the possibility of obtaining reliable data, more insightful and objective research. Perspective is not only a comparison of the linear dimensions of the fetal heart, but also getting integrated, volume indicators and dynamics of the heart. Dynamics of changes in the parameters of integrating the human heart at the stages of prenatal ontogenesis is characterized by periods of activation rate of rise of the mass of the heart and its linear dimensions and periods of relative stability. At the stages of embryonic and early fetal periods prevailing trend outstripping growth in length of the heart over the growth in width. In the middle and late periods of the fetus growth prevails in width over the growth in length. For the hearts of human embryos and fetuses characterized by transverse position in the thoracic cavity, and an increase (compared with the definitive state) of its volume in it, which is accompanied by an increase in left heart borders. Linear parameters of the fetal heart with ultrasound by an average of 8 % less than the anatomical. Forming the wall of the human heart at the stages of prenatal ontogenesis characterized histogenetic natural process aimed at compacting infarction and functional – the topological adaptation of the vascular bed. The sharp decline in the proliferative activity of cardiomyocytes and increase myocardial differentiation processes at the tissue level observed at the end of embryonic cardiogenesis and the fruit in the early period of human development. 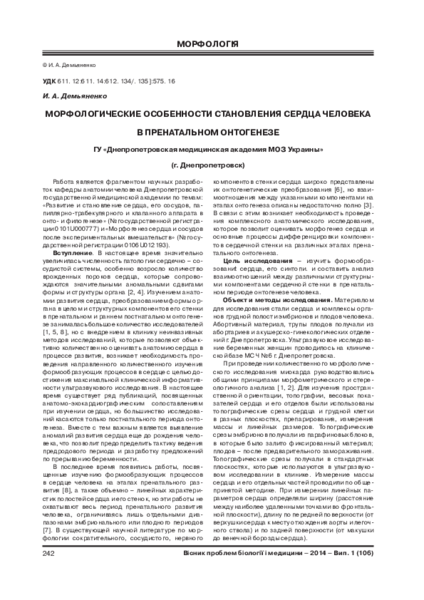