Bulletin of problems biology and medicine / Issue 1 (106), 2014 / Morphofunctional Structural Features and Development of Aortic and Pulmonary Valves in Ontogenesis
Kozlovskaya A. A.

As shown by our study, the accumulation of mesenchyme at the base of the endocardial crests for forming future aortic and pulmonary valves begins immediately after the distribution of konotrunkus. Starting from 5-6 weeks of prenatal development of large holes in the heart vessels blistering mesenchyme covered by endothelium, which do not contain collagen and elastic fibers, and appear as bulging mesenchyme vascular cavity. These structures correspond to its content endocardial cushions atrio-ventricular channel and crests of konotrunkus Studies have shown that formig of flap valves on this period of development include rather loosely arranged mesenchymal cells that are adjacent to the endocardium tight, thus have the same composition as the endocardial cushion atrio – ventricular holes and crests of konotrunkus . But the shape of protrusions is quite different from these structures. From the very beginning forming of semilunar valves of large vessels can be divided into three bulges into the lumen of the vessel, which will give rise to the valve flaps. Research of the horizontal slices topography of forming of aortic and pulmonary valves showed that in the early stages of heart forming processes pulmonary valves forms below aortic valve, but the mechanisms of formation of these valves and chronology coincide. Our studies have shown that the source of development of large vessels flap valves of the heart is one – base of mesenchyme of endocardial crests. In this period of cardiogenesis vessels’ wall is rather thick, not fully formed and contains a well-defined myocardial layer. Interesting in our opinion is the formation of the outer wall of the large vessels that occurs with the participation of the epicardium. Epicardium loose even in the later stages of cardiogenesis not on the entire surface tight to the vessel wall, the most snug fit epicardium to the wall of the aorta and pulmonary trunk, that we observe on the front surface vessels. Thus, at 6-7 week of prenatal development are not yet fully formed wall of the aorta and pulmonary trunk, and endocardial cushions already allocated to individual dampers forming future semilunar valves. Subsequently, the formation of the semilunar valves of the aorta and pulmonary trunk of embryonic heart occur quite similar. We investigated the underlying processes that occur in the primary flaps of semilunar valves – forming of collagen fibers and formative processes. Processes of connective tissue forming in the valves start at later stages of development. Cluster of mesenchyme of major vessels of the heart from the very beginning of their formation play a role of primary valves. As a result of anatomic experimental study examined age peculiarities of aortic and pulmonary valves during ontogenesis, as well as the sources and timing of formation of these valves. Source for the development of aortic valve apparatus and pulmonary trunk valves is the mesenchymal cells of the heart wall, aorta, pulmonary trunk, endocardial cushions. Forming of damper valves in the embryonic period of development include rather loosely arranged mesenchymal cells, which significantly increased the foundation and attached to the vessel wall and the free surface faces in the lumen of the vessel . The growth of blood vessels and their formation leads to the separation of the walls of the ventricular wall flaps. Valve flaps of aorta and pulmonary trunk contain the vascular endothelium, the amount of which depends on the area of the valve. The greatest number of the endothelium, and the presence of vessels in areas marked flap valves that are attached to the wall of the aorta and pulmonary trunk. As you move to the free edge flap and the presence of vascular endothelial cells is reduced and there are no areas of vessels. In postnatal ontogenesis number of parameters of aortic and pulmonary trunk valves tend to increase. Growth rate parameters pulmonary valve apparatus and the aorta valves during postnatal period varies. Thus, the most intense period of growth is adolescence and youth, the greatest stability of these parameters is observed in the second mature and old periods. 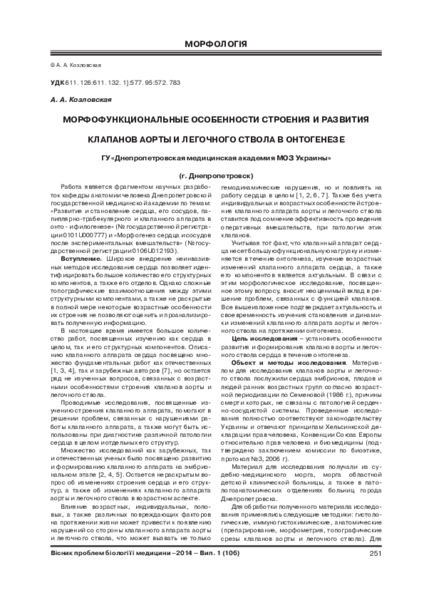