Among the reasons for the adverse effects of the progression of intestinal obstruction most authors recognized the important role of intestinal paresis, which leads to metabolic damage intestinal wall and intestinal failure, sometimes resulting in increasing endogenous intoxication, peritonitis and ultimately – multiple organ fail- ure. The purpose of the study was to: determine the features of the dynamics of changes ultrastructure in isolated areas of obstruction of the small intestine in experimental modeling of occlusion and reperfusion period. Experi- ments were performed on 30 mongrel white laboratory rats that simulated low acute obstructive intestinal obstruc- tion, and 48 hours after the experiment began restoring the permeability of the digestive tract. For electron micro- scope study of cut pieces of the middle parts of the small intestine 12-15 cm above the place of obstruction in 12, 24, 48th of 72 hours from the start of each phase of the experiment. After 12 hours from the start of the simula- tion severe low blood capillary small intestinal obstruction looked moderately dilated and contained in their lumen separate red blood cells. They formed a wall as «light» and «dark» endothelial cells, as evidenced by an increased functional activity, and their lack of enlightenment and swelling of the cytoplasm. Changes observed according to the hemodynamic features of certain reactive by the enterocytes. They consisted of focal enlightenment cytoplasm expanding tubular granular endoplasmic reticulum and Golgi complex cisterns. Mitochondria are different coated matrix and partial destruction of the cristae. 24-hour progression of acute small intestine obstruction accompanied by the increase of intensity features enhanced blood circulation in the wall of the small intestine. From the side of enterocytes observed damage and fragmentation of the apical microvilli border cells. Enlightenment cytoplasm is result of edema. As a result of degradation of organelles, including mitochondria, and expanding tubular granular endoplasmic reticulum and Golgi complex reservoirs formed in the cytoplasm of numerous vacuoles. Between the columnar enterocytes were found migrating lymphocytes. Another of the features of the observation period was the discovery in the wall of the small intestine plasma, which may be a sign of antigen provocation as a result of increased permeability of the intestinal wall. Deepening of hemodynamic disorders which manifested in a 48-hour period of increasing plethora vascular bed is a manifestation of continued progression of acute small intestine ob- struction. The blood capillaries were filled with clusters of red blood cells resulting in their clearance significantly expanded. On functional strain showed endothelial enlightenment and vacuolization of the cytoplasm. Markedly reduced number of organelles and suppressed pinocytosis. Basement membranes lose their sharpness, and even become fragmented perivascular edema occurred. All these changes were compounded to 72 o’clock experimen- tal observations. Characteristic of the later periods were also identify plasma cells in various stages of disorgani- zation and often with signs of apoptosis. Persistent violations hemodynamics combined toxic effects of stagnant intestinal contents led to further development of significant destructive changes in the epithelial cells of the small intestine wall. Qualitatively, they did not differ from that detected in previous periods of observation. However, their quantitative characteristics significantly increased. The sudden removal of small bowel obstruction after a previous 48-hour occlusion by active vasomotor reactions accompanied. After 12 hours of the restoration of blood capillary permeability looked narrowed, had a clear round shape, and their lumen was densely filled with erythrocytes. Most endothelial cells were from signs of degradation nuclei and organelles. This helped to preserve and even some deeper dystrophic and destructive changes in the columnar enterocytes. However, after 24 hours of reperfusion period in intestine small vessels were observed processes of recovery and normalization of bloodstrem gradual recovery ultrastructural organization of endothelial cells. Although epitheliocytes mucosa has continued to persist degenerative changes, along with what could mark the signs of recovery in some structures. In later periods of reperfusion period (48 and 72 hours) gradually restored blood flow in the wall of the small intestine, and with it the ultrastructural organization of epithelial cells covering the mucous membrane. Thus, acute intestinal obstruction in the early stages of development causes reflex increased blood flow in the vessels of the small intestine, as well as increasing the functional activity of the epithelial elements mucosa. The emerging second in more remote periods decrease bandwidth channel due to narrowing of the lumen of micro vessels leads to deterioration blood supplying structures of the small intestine, which shows dystrophic, degenerative changes in the cells of the mucosa. When restoring patency of small bowel obstruction after previous at first not going to improve blood circulation and restore morphofunctional organization of the epithelium, quite the first changes that were formed under the influence of aggravated obstruction , which can be an important part morphogenesis reperfusion syndrome and multiple organ failure. 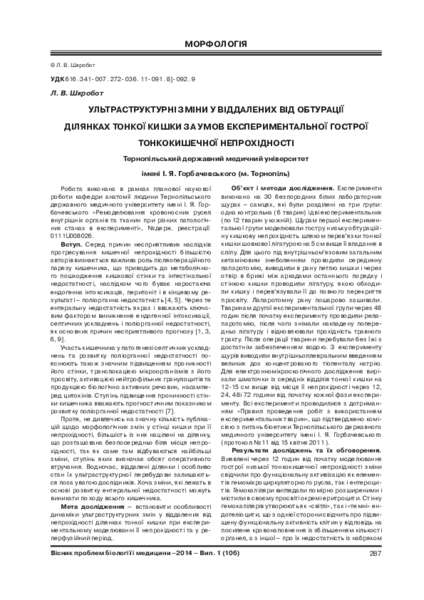