Bulletin of problems biology and medicine / Issue 1 (106), 2014 / Dynamics of Morphological Changes of the Wall of the Small Intestine in the Simulation of Acute Intestinal Obstruction. Evaluation of the Protective Effect of Different Antibiotics
Oliynyk A. E.


Dynamics of Morphological Changes of the Wall of the Small Intestine in the Simulation of Acute Intestinal Obstruction. Evaluation of the Protective Effect of Different Antibiotics

We studied the dynamics of morphological changes of the wall of the small intestine in 40 rats with a model of acute intestinal obstruction. In order to slow down the destructive processes that contribute to the de- velopment of mainly inflammatory bowel wall changes were applied to different antibiotics. The problem of acute intestinal obstruction has not lost its relevance, despite the relatively small proportion of this pathology among other acute diseases of the gastrointestinal tract. In addition, despite the introduction of new medical technology, drugs [1, 4, 7], the results of treatment of these patients remain unsatisfactory and in recent years have tended to improve. According to modern statistics, postoperative mortality in acute intestinal obstruction is between 10 % to 35 %, significantly higher mortality figures for other acute surgical diseases. This high mortality rate is usually ex- plained the development of septic complications that arise in 26,2-31,4 % of the operated patients [8, 9]. The medical literature contains quite a large number of reference about an acute intestinal obstruction [2, 8, 9], but they are all based on the use of clinical and laboratory data [5, 8], whereas the dynamics of morphological changes of the intestinal wall worthy of attention was not paid to [3, 6]. The aim was to study the morphological changes of the wall of the small intestine in the dynamics, using an experimental model of acute intestinal obstruction. Also studied the effect of antibacterial drugs on these changes. The object of the experiment were the 40 male rats genetic line “Wistar”, which were divided into 5 groups of 8 animals each. Were divided into four main groups, respectively to one of four antibiotics. In the fifth (control) group included animals not treated with antibiotics, despite the progression of acute mechanical intestinal obstruction. Animals of the first group (A) in the first hours after the formation of acute intestinal obstruction received intra- muscular administration of ampicillin every 4 hours for 50 mg / day throughout the experiment, which lasted for 2 days. The animals of the second group (G) as intramuscularly injected every 8 hours gentamicin 2. 5 mg / day. Group 3 animals (O) was administered intramuscularly every 24 hours oframax rate of 37. 5 mg / day, and the animal group (C) were injected intravenously every 12 hours cifran dose of 5 mg / day for two days. The control group (C) (5 individuals) did not receive antibiotic therapy. After removal of animals from the experiment according to the specified timing in the tables produced abdomi- nal opening, then the wall portions of the small intestine, which have been arranged several obstacles above the guided for histological examination. Thus, the study of the above parameters allowed us to estimate the dynamics of swelling and inflammation, ul- cerative necrotic processes, which are especially dangerous in acute intestinal obstruction, as well as the possible impact on the dynamics of these processes of antibacterial drugs. Histologically found that above the obstacles in the intestinal wall shows signs of progressive suppurative in- flammation starting from the mucosa and gradually extending to deeply lying departments. As the progression of inflammation in the intestinal wall develop destructive processes that lead to clinically perforation and development of fecal peritonitis. When applying systemic antibiotic therapy for animals with an experimental model of acute intestinal obstruction in histologically inflamed bowel wall changes are detected, indicating a significant slowing in it suppurative destruc- tive processes in comparison with control animals. Reduction in the intensity of the inflammatory and destructive processes was more pronounced in animals treat- ed cifran and oframax, where even 48 hours after the formation of acute intestinal obstruction did not arose focal necrosis of the intestinal wall. The animals treated with ampicillin and gentamicin was not significant change in the dynamics of suppurative destructive processes, as well as the control group. At the same time formed pockets of the bowel wall perforation with peritonitis. Due to sufficiently clear chronology of purulent-destructive processes in the stack of the small intestine in acute intestinal obstruction, with the influence of systemic antibiotics, we can estimate the time of onset of irreversible degradation level of the intestinal wall. Thus, these findings may influence the choice of surgical tactics and volume of surgical intervention. 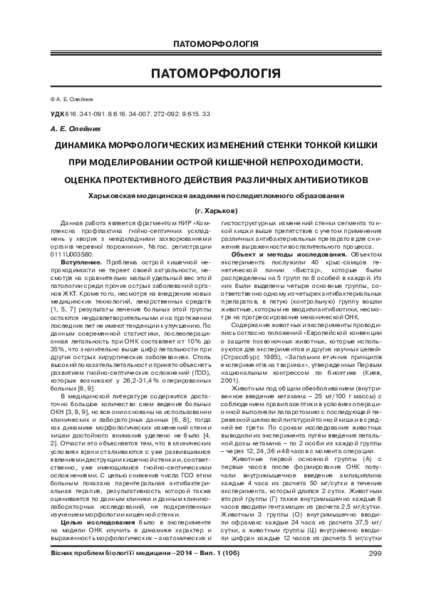