Cellular Response to Physical Loading during the Sports Training

The problem of correct determination of the state of human fatigue is of great practical significance. The state of fatigue has various manifestations and can be determined by different methods. Exercise training in apparently healthy person impacts on several areas, including maximal oxygen uptake, central hemodynamic function, autonomic nervous system function, peripheral vascular and muscular function, and submaximal exercise capacity. Many muscle properties change during fatigue including the action potential, extracellular and intracellular ions, and many intracellular metabolites. A range of mechanisms have been identified that contribute to the decline of performance, including the action potential, extracellular and intracellular ions, and many intracellular metabolites and, in principle, characteristics of main factors involved in these mechanisms may be used for fatigue assessment. The modern methods of fatigue assessment imply usage of complex technical devices and biochemical methods which often are connected with collecting of blood samples and therefore traumatic. In this connection, it is important to determine the one general parameter, which would help to assess the changes in the state of the organism after exposure to various factors. In this paper we investigated the possibility of application of cytological indicator – the state of chromatin in cell nucleus due to fatigue. The condensation of chromatin in the nuclei of buccal in epithelium was used as a general indicator of stress. Previously the state of chromatin in nuclei of buccal cells was applied in research on the influence of physical stress (training walks, physical charges on the cycle ergometer). The state of condensation of chromatin in human buccal epithelium nuclei was investigated in connection to sport loads. Cells were stained with 2 % orcein for 30 minutes, and then examined at magnification x 600. The average number of the heterochromatin granules for 30 nuclei was calculated. Students of Kharkiv University of age approximately 21 years old were goodwill donors of cells. There were two groups of students – trained and untrained. Group of students got the physical loadings – volleyball training session. Sportive training caused growth of the degree chromatin condensation, especially in group of untrained students. In the group of untrained donors at the first stage of the training session the increasing of the level of chromatin condensation was more pronounced than in the group of athletes – candidates for degree Master of Sports. From the data obtained among untrained students it’s evident that the growth of number of the heterochromatin granules after two hours it is even more pronounced than after one hour, indicating the process of development of fatigue. We can interpret the observed increase in number of the heterochromatin granules as an evidence of the stress response of the organism to sport training charges. The response of the organism in trained athletes is less pronounced than in untrained students. As a rule, the phenomenon of condensation of chromatin is associated with decreased activity of biosynthetic processes in the nucleus. This reaction is also a nonspecific cell response to the action of damaging factors. In this case, condensation of chromatin may be due to effects on stress hormones, such ass, adrenalin, noradrenalin and hydrocortisone that are produced in response to intense physical activity. Our data suggest that physical stress induces an increase of the degree of chromatin condensation in buccal cells thus reflecting the nonspecific reaction of human organism to stress. Physical activity associated with sports training leads to an increase in the degree of chromatin condensation in the nuclei of buccal epithelium. 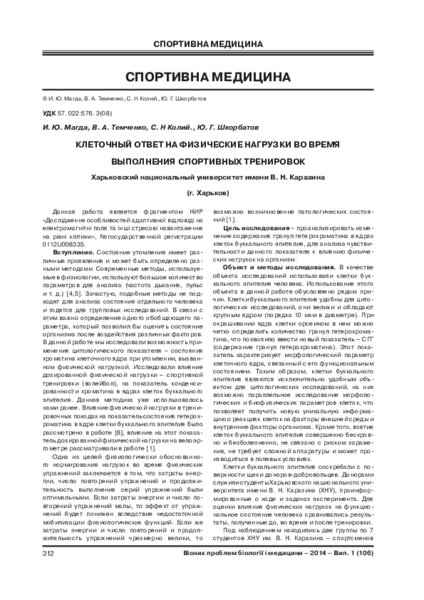