The purpose of the research was to define the impact of nitrates and nitrites on the function of sali-vary glands, especially on the activity of the a-amylase enzyme on a background of chronic nitrate intoxication. Object and methods of research. The experiment was conducted on 85 Wistar white rats, weighing 160-250 g, involved in 10 series of experiment. The results of research and their discussion. After 14-day introduction of sodium nitrate to rodents, no activity of a-amylase, regarding intake rodents, has been observed. With more long-term intake of sodium nitrate in the organism of rodents, a significant decrease in activity of a-amylase has been detected: after 60, 90-daily poisoning by 14.5%, 17.7%, respectively. It can be assumed that the reduction in the functional activity of a-amylase in the tissues of salivary glands on the background of chronic nitrate intoxication develops secondarily. Hemic hypoxia develops primarily due to accumulation of methemoglobin in blood after 30, 60, 90-day intoxication against which the tissue hypoxia devel-ops secondarily, affecting the ATP synthesis and reducing the energy potential, bioenergy processes in tissues of salivary glands. The study found that the formation of a-amylase in the salivary glands of rats is the volatile pro-cess. And since the salivary glands are the organ with double function, they are not only the excretory organ, but also the endocrine one. In the tissues, nitrates undergo biotransformation into final product of nitric oxide (NO), where it accumulates in the form of dinitroziled complexes of iron. Such accumulations affect enzymatic activity of Krebs’ cycle system and function of ferruginous macromolecules, which are carriers of electrons in respiratory chain, dysfunction of which reduce energy processes in cells. This is associated with inhibition of glyceraldehydes 3 phosphatdehydrogenase, resulted in nitrosolation of tolite groups of enzyme, which limits the ability to compensate bioenergy insufficiency in tissues. In addition to the substrate form of hypoergasia dissimilation on the background of chronic nitrate intoxication an enzymatic alternative is developing too. Function of enzymes, containing in their active centers ions of copper and iron, is especially disturbed. These are enzymes of cytochrome’s respiratory chain, and antioxidant protection. Such enzymes activate the energy metabolism in the tissues of the body and pro-tect cells from free radicals. All of these dysfunctions lead to the development of tissue hypoxia, on the background of which a depression of function of salivary glands is observed; this is evident by reducing of a-amylase formation and its activity under different terms of rodents’ poisoning. Conclusions. Nitric oxide, when getting into organism turns into more reactive compounds, i. e., nitrites, which are accumulated in the tissues of the salivary glands in the form of dinitroziled complexes of iron, lead to hypoer-gasia in the tissues that blocks primarily donors and acceptors in the tissues, containing ions of copper and iron in their active centers. All of these processes lead to the development of tissue hypoxia, the growth of free radical oxidation, abnormal activity in cells’ mitochondria, resulted in depressing of volatile processes. Since the process of a-amylase formation in the tissues of the salivary glands is the volatile processes, such accumulations lead to decrease in a-amylase formation. 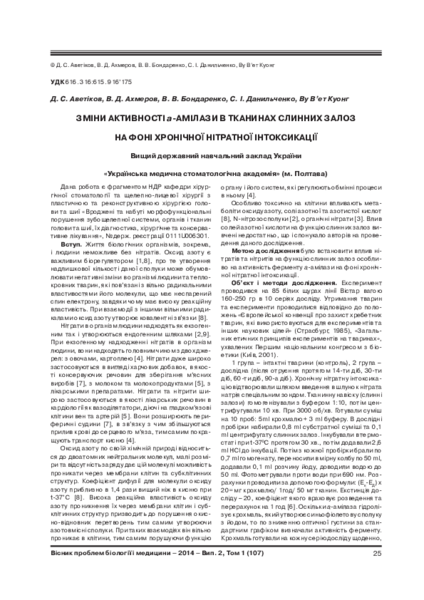