According to the latest statistics published in the current scientific literature pathological scarring occur in 10% of the world’s population, with a fairly high percentage of postoperative recurrence of 55-68% . There is no unity of views on the mechanism of scarring. Formation of keloids due to violation of correlation between synthesis and lysis of collagen, where the leading role violation interaction between fibroblasts and macrophages. Sometimes, the normal scarring process my go wrong. The reasons for this are numerous: lack of adequate comparison gaping edges, strong tension of the skin adjacent to the wound, hypoxia, burns, wounds fester, especially the immune system, genetic predisposition, etc. Some of these factors play a role in promoting, but in the process of healing the wounds of their value can change in any direction, which leads to the emergence of so-called “vicious circle”. Then, instead of a flat scar formed concave or protruding above the skin, and in more rare cases – keloid scar. Some authors one of the causal factors of hypertrophic scarring believe nerve damage skin, which, in their opinion, just leads to the breakdown of relationships with the CNS, as it gives the increase of the rumen. Warren J. C. offered to pay attention to the pathology of blood vessels in keloids. Vessels are beginning to crumble under the pressure of the surrounding connective tissue, especially in the central part of keloids, and thereby contribute to the occurrence of new tumors, secondary development of keloids. Great influence on the quality, size and aesthetic appearance of the scar is a wound disposition with respect to the field lines of the skin, resulting in a significant amount of research on the development of optimal surgical approaches, the use of supporting bands, gels, silicone films, etc. In the literature, found many publications and dissertations devoted to influence the ways approximation of the wound edges and suture material for the formation of scar. By the mid XX century problem of surgical filaments are not of special interest to surgeons. Only the 50’s. XX century revealed that the quality, chemical composition and structure of the material filaments depends on their reaction to tissue implantation. Despite the increased interest of researchers to the problem of morphogenesis pathological scarring, including the authors, there are significant differences that require further study. Conducted numerous studies of the probability of formation of pathological scars in different parts of the scalp and neck, but little attention is paid to their prevention, including topographic features. Intraoperative prevention methods are rare in the literature, though, we think that prevention of pathologic scars at this stage is the most effective. Therefore remains high relevance to study the pathogenesis of scar tissue formation and development of adequate prevention method of intraoperative pathological scar formation. 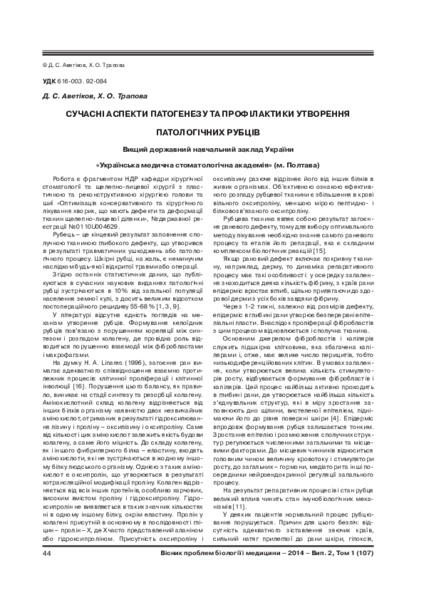