The purpose of the researchis comparative clinical estimation of marginal bonding of photocompos-ite material and glassionomeric cement to the dental hard tissues in restoration of lateral teeth by various types of “sandwich techniques”. Object and methods of research. 30 patients, aged from 35 to 45, whose 30 teeth were restored (Black Class II) in connection with median caries, have been examined. All examined patients were divided into two groups depending on the type of utilized “sandwich technique”. 15 patients were included into Group I, whose carious cavities were restored by the technique of opened “sandwich”, glassionomeric cement completely covered the gingival wall, having restored contact surface to the equator; 15 patients were included into Group II, whose, carious cavities were restored by the technique of closed “sandwich”, i. e., contact surface was completely restored by photocomposite material. Preparation and restoration of carious cavities was performed in compliance with generally accepted technique. After total etching by 37% orthophos-phoric acid gel, the Adper SingleBond 2, 3М ESPE dental adhesive was applied in accordance with company’s rec-ommendations; the Ketac Molar, ЗМ ESPE glassionomeric cement was introduced into carious cavity and, accord-ing to selected technique, filled to dentin-enamel margin or restored the contact surface, using the matrix system. the Filtek Ultimate, 3М ESPE photocomposite material was introduced in portions, reconstructing the anatomical dental form, and irradiated by the “soft start” technique by means of LED- photopolymerizer. The control studies have been carried out immediatly after finishing the restoration procedure and in 12 months according to “marginal bonding” criterion on perimeter restoration, as well as on the gingival wall, as far as possible, in compliance with Ryge scale and in-house technique, developed at the Department of Propedeutic Dentistry, allowing to estimate marginal bonding of the material to the gingival wall of the restored carious cavity on the as-sumption of creation of access to it due to wedging of restorable and adjacent teeth. Results of the research and their discussion. The clinical investigations showed that immediately after restora-tion procedure all restorations in patients of both groups have been rated by the highest «А» rate, i. e., all restora-tions had smooth transition from the material to enamel according to both Ryge-criterion and in-house technique. Further examination, made in 12 month, showed that the results on the “marginal bonding” criterion according to Ryge scale were better, but statistically invalid results (р>0,05) have been obtained in patients from the second group, who have been made restorations of carious cavities, using the technique of closed “sandwich”. So, good marginal bonding was observed in 93,33±6,44% of restorations in patients from Group I and 86,67±8,78% of restorations in patients from Group II. These performances were rated by the highest «А» rate. All the other perfor-mances in patients from both groups were rated by the «B» rate – 6,67±6,44% and 13,33±8,78% of restorations, respectively. Less poor results were obtained during the examination of marginal bonding on the gingival wall, using the in-house technique. The «А» rate was awarded to 86,67±8,78% of restorations in patients from Group I, and only 73,33±11,42% of restorations in patients from Group II. Marginal bonding failure without dentin exposure between the material and enamel (“В” rate) was detected in 13,33±8,78% and in 26,67±11,42% of restorations, respec-tively, i. e., the indices differed by 2 times. The results, obtained according to in-house technique, allowing to rate the marginal bonding of restorative material on the gingival wall, were worth than during the conditional study, but statistically valid difference was not observed (р>0,05). Conclusions. Thus, the comparative clinical estimation of the Filtek Ultimate, ЗМ ESPE and Ketac Molar, ЗМ ESPE photocomposite material to the dental hard tissues in restoration of lateral teeth by various types of “sandwich techniques ” showed certain advantages of opened “sandwich” technique over the closed one. 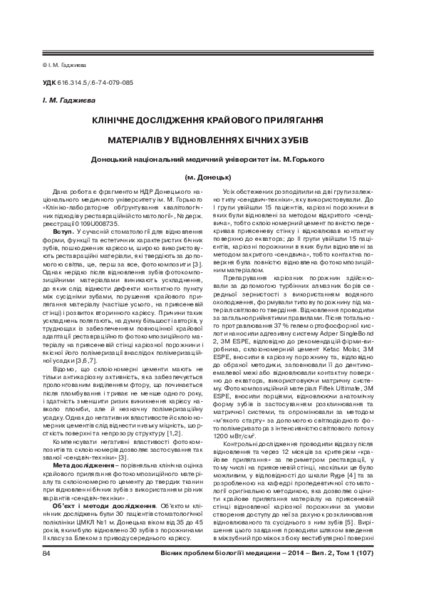