In separate works of our and foreign authors importance of influence of the central nervous system on emergence and the course of stomatologic diseases had been proved. The special attention is drawn the simultaneous defeat of tissues of parodentium and a mucous membrane of an oral cavity which are accompanied by depressive frustration. One of the possible factors of development of diseases of parodentium, keratosis and depressions is violation of system and local immune mechanisms. Research objective is studying of system and local immunity at patients with simultaneous defeat of tissues of parodentium and a mucous membrane of the oral cavity, being accompanied by depressive frustration. Materials and methods. For achievement of a goal definition of an immunological state of 186 patients with diseases of parodentium and MMOC and high level of depressive experiences, age from 16 to 49 years which are on treatment for 2004-2007 had been carried out. Immunoglobulins in oral liquid were determined by a method of a radial immunodiffusion in gel by Mancini in Simmons modification with use of anti-serums against sIgA, m_gA, IgG by Russian producer (Medical immunology, Moscow) and microtablets of the firm Hyland (USA). The accounting of reaction was carried out a without graphical method of calculation of concentration of immunoglobulins. Results. Immunological researches allowed to reveal considerable violations of a local immunological homeostasis in oral cavity of the surveyed patients which were characterized by considerable decrease in sIgA and similar increase of mIgA і IgG. The IgG level in oral liquid of patients with the soft leykoplakiya, being accompanied with depression, exceeds a similar indicator of control group in 5,7 times (p<0,001). It is possible to explain with the expressed process of violation of differentiation and a physiological desquamation of an epithelium and profound changes of a mucous membrane at the keratosises which activate raised production of this antibody. The studying of level of the proinflammatory and immunoregulatory cytokines in oral liquid of the surveyed patients with simultaneous defeat of tissues of parodentium and a mucous membrane of an oral cavity that is combined with depressive frustration had been carried out: IL-1, FNP-і IФ-. Thus, change imunocytokines which play the central role in development of chronic inflammatory process in gingivitis, periodontal disease and keratosises is in most cases had established authentically. Conclusions. Development of diseases of parodentium and MMOC, combined with depressive frustration, is accompanied by considerable oppression of mechanisms of system and local immunity. Probable changes of structure of immune competent cells in plasma of blood (CD25, CD95) and immunoglobu-lins and the proinflammatory cytokines in a mouth (sIgA, mIgA, IgG, IL-1, FNP-ά, IF-) with level of reliability of indicators of rather healthy people of 99-99,9% are established statistically. Character of changes of system and local mucous immunity in the surveyed group of patients indicates the need of their correction for complex treatment. 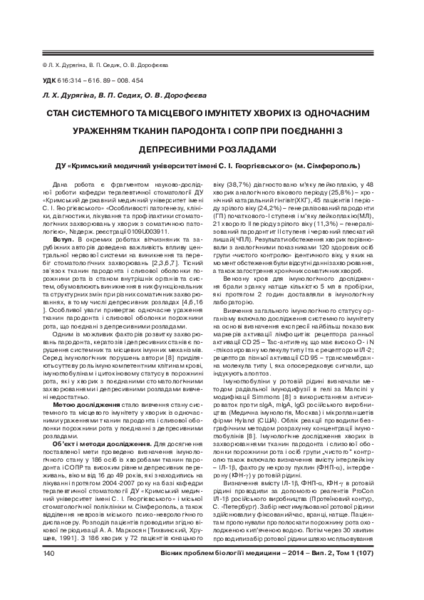