THE DAMAGES PREVAILING PROGNOSTICATION AT THE COMBINED CRANIOCEREBRAL AND MAXILLARY TRAUMA

The problem of prevailing of damages estimation at a combined craniocerebral trauma (CCT) has an important value for surgery, especially in the plan of choice of method of treatment. Research purpose: exposure of distinctions in the biochemical picture of blood at the isolated unheavy cranioce-rebral trauma and fractures bones of mandibula and development of criteria of prevailing of damages at a combined trauma in the acute period of trauma. Material and methods. There was investigated 120 rats of both sexes by mass 190-220, divided into groups by appearance traumas: adult middle severity brain trauma (CCT) (n=32), trauma of jaw (n= 40), combined trauma (CCT + trauma of jaw, n= 48). Results and discussion. At designed by us CCT, the looked after changes reflected violations of all types of metabolism of the trauma of jaw and сombined trauma, the state of oxidative stress in an organism on the whole, and also changes in metabolism of separate organs and fabrics. The educed distinctions were explained by the biochemical features of the injured tissues, that in turn was determined by their morpho-functional features. Educed distinctions in character of return reaction of organism on the trauma of cerebral and facial skull, grounded to us for subsequent development of дифференциально-диагностического algorithm. An estimation in the prognosis of prevailing of сочетанных damages of meaningfulness of biochemical indexes (Кi) is carried out by us on the methods of Wald. On the second stage of the method elaborative there vere determined the exactness of the selected criteria. Exactness was estimated by value by frequencies of parameter registration in the indicated interval «≤of M+m» or «≥M – m». In subsequent the sizes of differentially-diagnostic coefficients of Ki expected for the selected indexes. The positive size of total coefficient of «К» specifies on prevailing of damages of brain, negative – jaws. Authen-ticity of coefficient is determined by his size. The results of diagnostics are considered reliable at the size of this coefficient ≥20 or ≤- 20. In control series it is shown by us, that at the use with the purpose of differential diagnostics of the method de-scribed higher of change in the biochemical picture of blood, characteristic for the dominant trauma of brain, lev-eled on 2th day and traumas of jaw – on 7th day. For animals with dominant ЧМТ on dissection were found out the obvious signs of цитотоксического head cerebral edema, for other animals such signs were not. These changes reflected violations of all types of metabolism, state of oxidative stress in an organism in all, and also changes in metabolism of separate organs and fabrics. Conclusions. It is set on the whole, that in the initial period of traumatic disease on the row of biochemical in-dexes it is possible to differentiate localization of trauma, i. e. to define specific biochemical character of CCT and traumas of jaw, and at сочетанной pathology – to estimate the degree of dominant damage. About prevailing of damages of brain at a сombined trauma, in particular, 18 biochemical signs distinguished by us testify: concentra-tion K+ ≥4,5 mmol/l, Na+ ≥155,0 mmol/l, Са++ ≥3,2 mmol/l, Кr ≤114,0 mkmol/l, M ≥7,8 mmol/l, Blood Uric Acid ≥274,0 mkmol/l, Blood Glucuse ≥6,4 mmol/l, Тriglycerides ≤41,0 mmol/l, and also change of activity of enzymes – -Аmilase ≤56,8 units, Аsparagine Тransaminase ≥104,0 units, Аlanine Тransaminase ≤94,3 units, Alkaline Phos-phataze ≥200,0 units, Lactate Dehydrogenase ≥1118,0 units, RNA-aze ≥0,48 units, DNA-aze ≥0,32 units, Cre-atinine Kinase ≥2500,0 units, Cathepsin D ≤3,4 units, concentrations of Diene Conjugates ≥2,2 U/ml. The same indexes specify On prevailing of damages of skull, but with the reverse orientation of sign. Result of biochemical diagnostics of dominant trauma of cerebrum coincide with the morphological signs of цитотоксического cerebral edema. The methods of prognosis of prevailing of damages at combined CCT and trauma of jaw can be used only in a period to twenty-four hours after a trauma. Specific distinctions in prevailing of damages require different medical measures and can be the basis of choice of optimal medical tactic in the specialized hospital.

craniocerebral trauma, prevailing of damages at a combined trauma 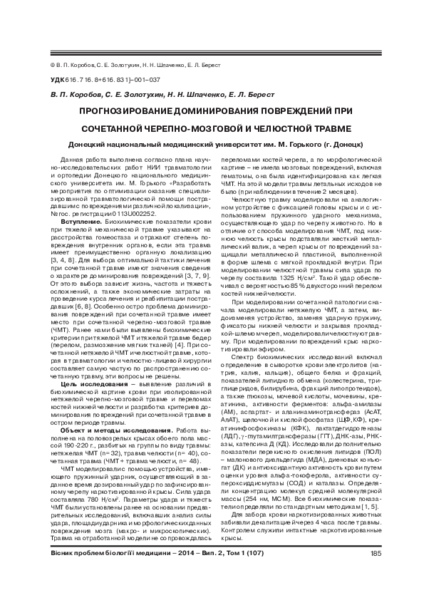