Bulletin of problems biology and medicine / Issue 2 part 1 (107), 2014 / THE IMPACT OF NEGATIVE ENVIRONMENTAL FACTORS ON THE LEVEL OF DENTAL DISEASE THE CHILD POPULATION
Luchynskyy M. A., Luchynska Yu. I., Ostapko O. I., Luchynskyy V. M.

The aim of the study was to investigate the influence of xenobiotics on oral health in children and the processes of free radical oxidation of lipids and physiological indices of antioxidant protection. Object and methods. To achieve this goal carried out epidemiological survey of 866 children aged 6 to 15 years. Survey of Children and definition of disease conducted by the method of WHO (1989). The degree of activation reaction of lipid peroxidation was determined by the content of malondialdehyde (MDA). Physiological antioxidant system activity was assessed by antyperoksydnoho enzyme – catalase (CA ) and antiradical action of the enzyme – superoxide dismutase (SOD). Results and discussion. As a result of the clinical examination of children living in polluted (study group) and relatively «clean» areas (comparative group) found that in the study group the prevalence of dental caries in young men made (89,63±1,86)%, and girls – (94,89±1,33)% (p≤0,05). In a comparison group of children caries prevalence was 1,2 times lower than in boys and in girls ((73,25±3,54) and (79,39±3,16)%, respectively) with respect to such a core group children (p≤0,05). Analysis of the intensity levels of caries in those groups comparison showed that children with polluted area intensity decay parameters of milk and permanent teeth with significant differences exceed the performance comparison group of children that can serve as evidence of the negative impact of environmental pollutants on the body of children, including The prevalence of periodontal diseases in children was the main group : the boys – (53,70±3,04)%, in girls (60,58±2,96)%. In the comparison group, the prevalence of pathology was – (33,76±3,79)% – and the boys (36,36±3,76)% – girls. In children, the main group, with all dental nosology, noted a significant increase in lipid peroxidation products, malondialdehyde (p≤0,05) with respect to such comparative groups: caries in teeth – by 1,6 times, with periodontal disease – 1,7 times, with associated pathology – in 2,2 times. It should be noted that the highest rate of MDA (3,19±0,28) mmol / ml was observed in children in whom was diagnosed with the presence of caries and periodontal diseases. In children, the main group determined a significant depletion of the antioxidant defense system, which manifest decreased levels of superoxide dismutase and catalase in relation to the comparison group Conclusions. In children, the prevalence of environmentally contaminated area, the intensity decay of milk and permanent teeth, the percentage of complications and the degree of activity of the caries process considerably higher relative performance of children relatively “clean” area. Also, they observed an imbalance in the antioxidant defense system, suggesting a negative effect of the components of air on the emergence and intensification of processes of hard tissue lesions of teeth in children. 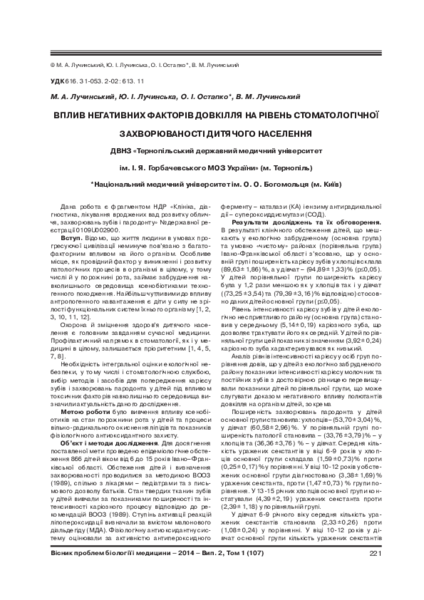