It is known that periodontal pathologies continue to lead the list of causes of tooth loss population. These conditions prevail inflammation – gingivitis and periodontitis. One of the factors that affect the condition of periodontal tissues is somatic status, including state regulatory systems of the body, especially the endocrine. One of the diseases in which hormonal changes are leading to pathogenesis is polycystic ovary syndrome (PCOS). PCOS is one of the most pressing problems of gynecological endocrinology, which is diagnosed in 3-16%. Fre-quencies of detection of PCOS rather variable due to the heterogeneity of clinical and endocrinological manifesta-tions problem with PCOS is not limited to the problem of infertility. In these women have not only a disease of the reproductive system, but also an increased risk of other diseases due to the development of hyperglycemia, insulin dependent diabetes, hypertension, metabolic lipoprotein disturbance. The list of recent pathological conditions is favorable background for the formation of pathological processes in the periodontium. The aim of this study was to determine the periodontal status in the presence of polycystic ovary syndrome. Objects and methods. To achieve this goal, it was assessed periodontal status and studied the medical records of 31 women diagnosed with polycystic ovary syndrome, which is applied for dental care and 15 women without somatic pathology aged 18 to 52 years. Using a questionnaire, the survey measured changes in subjective patient charter. The questionnaire included questions about the main complaints of patients with inflammatory periodontal diseases: the presence of discomfort, pain, bleeding gums, presence of purulent discharge from the gums. To determine the intensity of inflammation in periodontal tissues using marginally-papillary-alveolar index. Hy-gienic status of the oral cavity was determined using the Green-Vermillion index on the buccal surfaces 16 and 26, the labial surfaces 11 and 31, lingual surfaces 36 and 46. Results and discussion. Analysis of the results of the study showed that the discomfort in the gums feel 93. 54% women with PCOS and 20% women comparison group. A similar pattern was observed in the survey of patients with respect to swelling of the gums. The first group of patients experienced edema was significantly more likely comparison groups: 90. 3% women with PCOS and 13. 3% female comparison group. Women with PCOS have noted the presence of pain, bleeding gums in 65. 52% and 77. 42% women, respec-tively. In the comparison group of women with complaints of bleeding is defined in 6. 67% women. Bad breath noted all women with PCOS and 20% women comparison group. At initial examination in 35,48% patients of the study group showed signs of chronic catarrhal gingivitis (slight itching in the gums, bleeding them with mechanical stimulation, the presence of dental plaque without mineraliza-tion, swelling, redness of the gums). Teeth still not shifted. A similar clinical picture was found in 3 patients in the comparison. Another 35. 48% patients of the study group showed signs of generalized periodontitis mild severity (patients complain of bleeding gums when brushing and when taking solid food, bad breath, rapid formation of plaque and tartar clinically defined chronic or hypertrophic catarrhal gingivitis, periodontal pocket depth of 3-4 mm with se-rous-purulent discharge, abnormal tooth mobility degree I expressed traumatic occlusion, determined by X-ray resorption interalveolar partitions to 1 /3 of the root, alveolar bone osteoporosis expressed only slightly). In 29% patients – generalized periodontitis of moderate severity (except for bleeding gums manifest pain in the necks of the teeth from thermal and chemical stimuli, color change and configuration gums, an exacerbation of symptoms of purulent inflammation, with an objective examination determined catarrhal and hypertrophic gin-givitis, periodontal pocket depth of 5-7 mm with serous-purulent discharge, tooth mobility I-II degree, traumatic occlusion, radiographically defined horizontal and vertical resorption interalveolar walls up to 1 /2 the length of the root, moderate osteoporosis). It should be noted that such a condition as chronic catarrhal gingivitis was typical for young people with PCOS, whereas generalized periodontitis – persons from older age groups. In the primary definition of simplified hygiene index (index Green-Vermillion) in the study group, the figure ranged from 0. 3 to 3. 48 and higher than physiological in all patients. The average in simplified hygiene index in this group was 1,71±0,22, in the comparison group 0,57±0,17. Papillary-marginally-alveolar index in women with PCOS at initial examination ranged from 15. 21% to 87. 11%. The average in papillary-alveolar-marginally index consistent with 47,21±2,44%. The average value can be con-sidered as the extent of the pathological process in severe close to the whole group . In this case, 8 patients had severe degree (figure 51% or more). 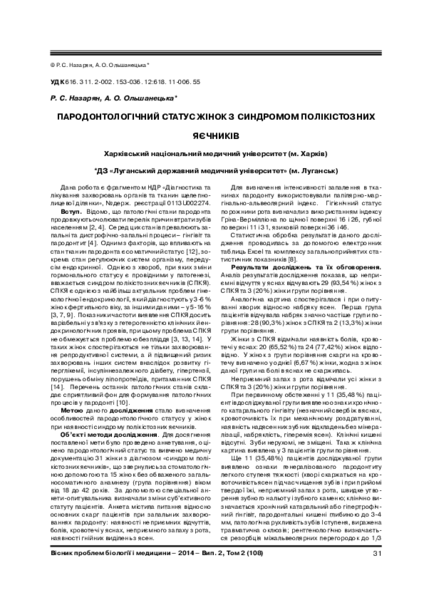