Bulletin of problems biology and medicine / Issue 2 part 2 (108), 2014 / SURGICAL ANATOMY OF THE TERMINAL BRANCHES OF THE EXTERNAL CAROTID ARTERY IN RELATION TO THE ANGIOSOMIC SCRAPS OF THE HEAD AND NECK
Nerobyeev О. I., Avetikov D. S., Sokolov V. M., Pronina О. M., Danylchenko S. I.

Introduction. In the clinical practice the recovery of lost tissues of head and neck and the search for the most efficient donor tissues is crucial for plastic surgeons. The purpose of the researchis to develop new types of arterized grafts from the head in the area of the posterior auricular and maxillary artery branching for replacement of tissues defects and lost organs on the face. Object and methods of research. 56 topographic-anatomical studies have been carried our on 28 corpses, as well as 48 clinical observances, during plastic reconstructive–restorative and cosmetic surgeries using arterized scraps from the areas that are blood- supplied by the investigated arteries. Results of research and their discussion. It has been established that the level of separation of the posterior auricular artery relative to the branch point of the common carotid artery has a fairly large fluctuations and depends on the shape of the head. In the numerical values this distance is the longest in dolichocephalous individuals, longer in mesocephalous individuals and the smallest is in brachycephalous ones. Posterior auricular artery in 9% of cases branches not from the external carotid artery, but is a branch of the occipital artery. Generally, auricular branch is of very fine diameter (especially in brachycephalous individuals). In this case it is practically impossible to make use of parotid scrap. Auricular branch of posterior auricular artery was clearly observed in 2°Corpses, ascended to temporal region, going over temporal fascia. In the temporal region it branched into large capillary network, anastomizing with branches of superficial temporal artery. On the basis of obtained data the arterized parotid scrap with the inclusion into blood – supplying pedicle of one of the branches of the posterior auricular artery has been developed and practiced clinically. The topographic-anatomical studies found that individual diversities of maxillary artery external structure are connected, in most cases, with the shape of head. Furthermore, it has been established that the distance from bifurcation of common carotid artery to the initial part of maxillary artery is rather variable and reaches the biggest sizes in individuals with dolichocephalic shape and the smallest sizes in individuals with brachycephalic shape. Individuals with mesocephalic shape have the mean values of this size. Correlation of maxillary artery with branches of mandible nerve – lingual and inferior lunularis nerves – are of practical interests for dental surgeons, oncologists and plastic surgeons during operations on deep area on the face, particularly when removing the upper or lower jaw in connection with malignant tumors. The relationship of the trunk of the facial nerve and the initial part of the maxillary artery has been studied too. The study established three variants of these formations: maxillary artery is located higher than the trunk of the facial nerve, lower than the trunk or is on the same level. Conclusions. In connection with topographic-anatomical studies of terminal branches of external carotid artery the scraps for reconstruction of subtotal ear defects, lateral margin of orbit and wing of nose, as well as upper lip, were suggested. The main parameters, characterizing the tract of terminal branches of external carotid artery (point and angle of separation, diameter, tract direction of arterial trunk, etc.) depend on the shape of head. 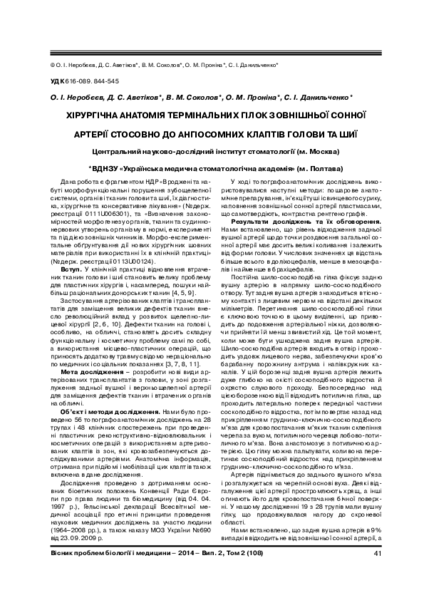