Optimal recovery of lost functions of dentoalveolar system in full or partial secondary adentia is one of the important tasks of prosthetic dentistry. The effectiveness of orthopedic treatment is largely determined by the properties of the base materials used in the manufacturing of removable dentures. Long-term experience of application of acrylic compositions has revealed a number of disadvantages of these materials: the presence of residual monomer methyl methacrylate in the denture base; not enough high strength properties and, consequently, low durability of acrylic dentures. The polymer itself is harmless material, but at the same time, the monomer, which is always presented in the polymer, can have negative and harmful effects on the human body. Removable laminar dentures, made of acrylates, can be manufactured by different technologies of polymerization: conventional, according to Gerner, i. e., polymerization in water bath; the dry method of polymerization, polymerization under pressure; microwaves. A number of studies are dedicated to manufacturing of removable dentures by these methods. However, the problem of residual monomer has not been solved yet. Some authors report that, when the conditions of polymerization in conventional method of dentures’ manufacturing, free monomer remains up to 0.2%. At the same time, according to other authors this index constitutes up to 0.5%. It should be noted that reports of many scientists as for the content of residual monomer differ significantly. In the investigations of residual monomer concentrations in dentures’ bases, manufactured in the apparatus for cast pressing, Kindiy D. D. (1999) found that it constituted 0. 23%, whereas by using the conventional method it constituted 0. 33%. To remove disadvantages that diminish functional usefulness and durability of dentures it is necessary to develop and improve the technologies which allow achieving high precision in the manufacturing of dental prostheses, improvement of polymerization, in particular. The paper considers the comparison of indices of residual monomer content in acrylic denture bases, manu-factured by different polymerization technologies. Studies have shown that the bulk of the monomer goes to water during the first month of exposure. The significant differences in indices of residual monomer content between sam-ples, made by the conventional technique with polymerization in water bath, and the samples, made by technology of electromagnetic processing and ultrasound. The highest content of free monomer has been found in samples, made by conventional technology of polymerization, i. e., in water bath, which constituted 0.28%. The lowest content of 0. 1% has been found in the samples that were produced with the use of electromagnetic field with intensity of 80 Oe. Residual monomer concentration in samples made with the use of electromagnetic processing is 2 times less. In 3 months the content of residual monomer became a little low, but the difference was not significant as com-pared to the first month of the exposure, except the indices in the 2 and 3 groups. This indicates once again that the maximum content of free monomer remains in plastic material in the first period after its polymerization and all activities should be aimed at prevention of complications, caused by its negative effect on the tissues of prosthetic field and the body as a whole. 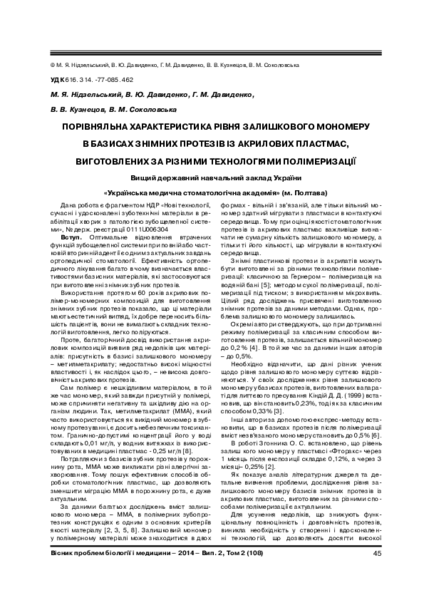