This paper is the fragment of research work, carried out at the Department of Emergency Medicine with Operative Surgery and Topographic Anatomy of HSEEU “UMSA”, entitled “Determination of mechanisms of morphogenesis of organs, tissues and vascular-nerve structures of the organism in norm, during experiment and under the influence of external factors. Morpho-experimental rationale of the effect of new surgical suture materials in clinical practice. ” State registration number : 0113U00124. Recent epidemiological studies show that the number of registered chronic inflammatory processes in paranasal sinuses comprise 146,0-148,°Cases per 1 thousand people. Among patients, who are receiving medical treatment at ENT in-patient departments 15-36% are patients with sinusitis. Acute rhinosinusitis is considered as inflammatory process in nasal cavity and paranasal sinuses, which lasts up to 4 weeks. Acute inflammation of paranasal sinuses, i. e., acute sinusitis, is generally associated with inflammatory changes in the nasal cavity, and, currently, is considered as common pathology, called the acute rhinosinusitis. In the USA, 1 from 7 adults experiences acute rhinosinusitis annually. In Europe acute rhinosinusitis takes the 4th place in visiting doctors of the primary health care. Thus, in our opinion, study of morphometric characteristics of structural elements of human frontal sinus mucosa is of significant practical value for current otorhinolaryngology and morphology. The purpose of research was the comparative analysis of major morphometric indices of structural elements of human septum and posterior wall of frontal sinuses in norm. Object and methods of research. Study material was the mucosa of frontal sinuses of 10 subjects, aged from 22 to 86 years old, who died of circumstances, not connected with paranasal sinus pathology. Morphometric analysis has been carried out on semi-thin sections. The results of research and their discussion. The study contains comparative analysis of morphometric data as for structural elements of human septum and posterior wall of frontal sinuses. Absence of probable differences between indices on the left and right side has been established for all studied criteria. The thickness of epithelium and proper laminar was practically similar to thickness of posterior wall and septum. The thickness of submucous layer was more on the septum by 10%, and was similar to posterior wall analogous index. Conclusions. It has been established that external diameter of terminal parts of glands was significantly smaller by 15% on the septum in comparison with posterior wall. The mean values of diameters of lumens of blood vessels of human frontal sinuses mucosa, except venules, were different at posterior wall and septum. Indices were higher on the septum. The mean diameter of veins was bigger by 35%, and mean diameter of arteries was bigger by 70% on the septum in comparison with posterior wall. 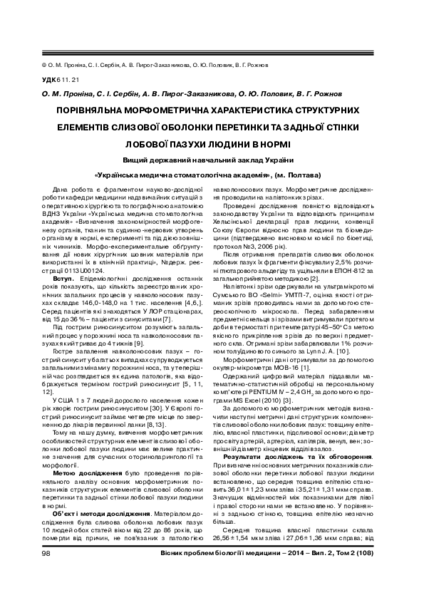