Article deals with the results of examination of patients with bilateral enlargement of parotid saliva glands, related to the general somatic pathology, in particular, to the neurogenic states, nutritional disorders, insular diabetes, Shegren’s disease. The aim of research was to describe the main differential-diagnostic characteristics of the reactive bilateral enlargement of parotid glands. Research was based on analysis of clinical observations of 46 patients with bilateral enlargement of parotid glands (15 of whom were diagnosed neurogenic sialosoadenitis, 14 – nutritional sialadenosis, 8 – sialadenosis combined with diabetes, 9 – manifestation of Shegren’s syndrome). Examination of patients included general (such as questioning, external examination, palpation), total and parotid sialometry, cytological study of parotid gland secretion, sialography. Despite of similarity, clinical displays of enlargement of parotid glands related to the different diseases have their own peculiarities. From differential-diagnostic point of view the most informative are differences in glands secretory functions as well as the results of cytological study of the composition of their secret, and data of X-ray investigation of their excretory ducts system by means of artificial contrasting. At neurogenic sialosoadenitis in the cellular composition of parotid gland secretion the presence of inflammatory series elements, desquamation of duct epithelium with its inflammatory metaplasia was revealed. On sialograms of parotid glands of the most patients the phenomenon of ducts spasm was determined. In patients with alimentary sialadenosis the cellular composition of the parotid glands secretion was presented by single cells of squamos and columnar epithelium. In this group of patients sialography showed a slight narrowing of the ducts of I-II orders, caused by increasing of stroma amount. In patients with insular diabetes in the cellular composituion of secretion, along with a few cells of squamos and columnar epithelium neutrophillic leukocytes and lymphoid elements were represented. According to sialography some changes relevant to the interstitial lesion of salivary glands were found. At Shegren’s syndrome in parotid gland secretion the increasing of mucus, appearance of reticular-endothelial elements, groups of lymphoid, cylindrical and goblet cells, a significant number of neutrophillic leukocytes could be observed. Sialogram of parotid glands was characterized by narrowing of the main duct, cone-shape and spherical ectasia of the ducts of I-II orders, disorders of ducts filling. Thus, obtained data allow to provide differential diagnosis of symmetric enlargement of parotid saliva glands with different etiology and pathogenesis, which makes it possible to carry out an adequate treatment. 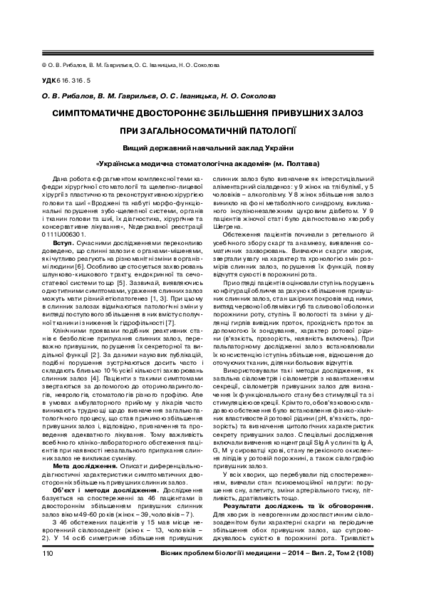