GENETIC REASONING TO THE FOMATION OF PATHOLOGICAL SCARS

Breaking the skin leads to scarring. Regulation of the process depends on many factors. Factors due to the depth and area of damage, for a period of wound healing process, the cause of the traumatic agent, decreased immunity, endocrinopathy, anemia, impaired associative microflora, reducing microcirculation and local hemodynamics. Many authors have focused on the notion of “a tendency to form”, but did not cover the fundamental determina-tion of this term. Abnormal scars were divided into three groups: a real keloid, false keloid and hypertrophic scar. This keloid occurs for no apparent reason, which gives reason to think about the predisposition to develop it for individuals. Unreal keloid can occur at any pre-damaged area of the body and on the site of the former scar with the transition to healthy skin. We have justified the term’ tendency to pathological scarring with clinical, morphological and genetic point of view. The aim of the work was to develop an optimal method of preventing postoperative pathological scarring in pa-tients who are prone to their formation. The object of the study: 18 patients who were treated after the planned interventions are prone to abnormal scarring. To determine the elastin gene polymorphism in exon 20 g28197 A> G we carried out the selection of genomic DNA from venous blood of the subjects with a set of «DNA -express- blood.» Elastin is a major component of the extracellular matrix (ECM) of the skin. Any structural, hereditary or acquired defects and or metabolism in ECM can cause cell and tissue changes that lead to the development or progression of the disease. To determine the role of genetic factors in the process of pathological scarring wounds studied polymorphism g28197A> G in exon 20 of the gene elastin in groups of patients who are prone to the formation of pathological scars that are functionally active in the areas of the face and neck, and not prone to the formation of pathological scars. Analysis of allele frequencies showed that the G allele was significantly more common in patients who are prone to abnormal scarring. We found a significant relationship between the presence of the polymorphic allele G and an increased risk of abnormal scarring. The study involved 38 patients aged 18 to 65 who were in inpatient and outpatient treatment after elective surgi-cal interventions for various diseases, primary surgical treatment of wounds in different topographic and anatomic sites of the head and neck. According to the anamnesis and clinical observations of the process of scarring wounds patients were divided into groups: patients with the presence of pathological scars (study group (n= 18)), which are often situated in functionally active areas of face and neck, and patients with no pathological scarring (com-parison group (n=20)). Analysis of allele frequencies showed that the G allele was significantly more common in patients who are prone to the formation of pathological scars (2= 5,19, p= 0,023). A reliable correlation between the presence of polymorphic allele G and increased risk of formation of pathological scars (HS= 3. 58, 95% CI= 1,3-9,87, p= 0. 023). Considering these results may suggest that the presence of the patient’s mutant allele G at misens mutations g28197A> G in the gene ELN is a factor of susceptibility to the formation of pathological scars in the process of scarring wounds. 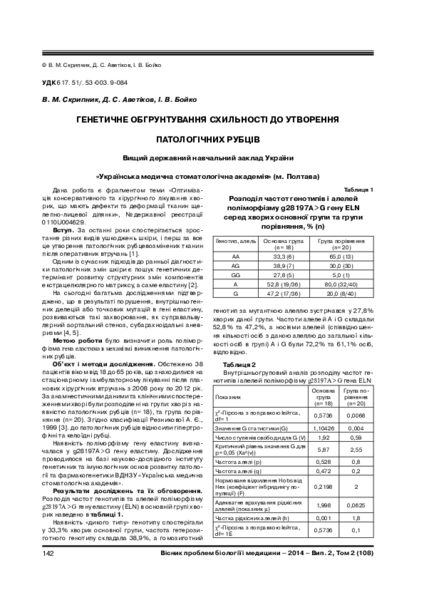