The relationship between occlusion and postural balance parameters of orthodontic patients was evaluated. Interdisciplinary approaches are being used more often by current dentistry for complex treatment and rehabili-tation of dental patients. For the last decade there has been impetuous growth of joint researches on dentistry and posturology (section on human vertical body position and ways of its holding). Osteopathic physicians scientifically proved the correlation between the incorrect posture (scoliosis) and malocclusion, distal occlusion in particular. Thus, it is predictable that correction of malocclusion will lead to posture enhancement. But available publica-tions do not report about evidence as for certain impact of various types of occlusion on human postural balance. Consequently, the development of this problem is of particular theoretical and practical importance, especially in orthodontic diagnostics and treatment planning. The purpose of the research was to study the impact of dentoalveolar system, occlusion ratios in particular, on functional condition of postural system on the grounds of the analysis of patients’ stabilograms. Multipurpose survey of 56 people was conducted. There were 20 persons with orthognathic occlusion in the control group (the I observation group). This group included individuals with no previous orthodontic treatment, special dental status and disorders of posture. The II observation group included 36 patients with various types of pathology bite. We used standard methods of orthodontic diagnosis, both clinical and paraclinical for determining status of maxilloden-tal system [Horoshylkina F. Ia., 1999]. For studing the functional status of the postural system we have carried out research on the unit SportKAT 4000 (computerized trainer of kinestatic properties). After analyzing the results of the study of the functional status of the postural system based on computerized trainer of kinetic properties using the apparatus SportKAT 4000 there was found that patients with orthodontic bite pathology (II group) had worse postural body balance. It was reflected in deviations from the equilibrium stabiloh-rams to left, right, forward, backward compared with the control group (p ≤0,05). The trend of increasing of ampli-tude variations was observed in both groups with increasing bite at 1mm and 2mm. However, deviation increased more in the control group (I) with increasing bite at 1mm than in the experimental group (II), but these data are not supported by a high reliability level. At the same time, deviation difference was correct with increasing bite at 2mm in the I and II study groups with increasing bite at 2mm. Conclusions. • Occlusion dysfunction leads to postural changes in the functional status of a person. • Bite height changes lead to changes in the functional status by reducing vestibular response body. • Changes in vestibular reactions in patients with disorders of occlusion greater than such ones of the patients in the control group without such disorders. • Statistically significant change in the vestibular response body was observed with increasing bite at 2mm in both study groups. • Greater changes of the functional state of the musculoskeletal were observed system with increasing bite in patients with malocclusion (I group) unlike similar changes in patients with pathology bite. We can assume that this is due to the fact that the occlusion height change did not lead to compensatory mechanisms reorganization of the musculoskeletal system at the I study group in such short period of occlusion height change. 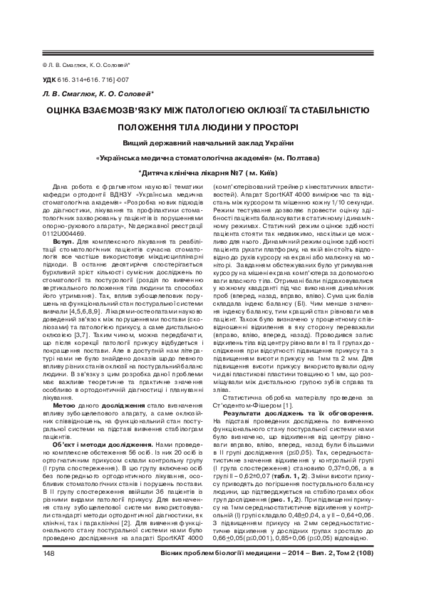