Bulletin of problems biology and medicine / Issue 2 part 2 (108), 2014 / ORIGIN AND MORPHOLOGICAL DIFFERENCES BETWEEN THYROGLOSSAL AND GOITROUS PHARYNGEAL CANALS AS THE POTENTIAL SOURCE OF DEVELOPMENT OF CYSTS OF NECK
Tkachenko P. I., Starchenko I. I., Byelokon S. A.

The purpose of the research is the comparison of current points of view with personal experience regarding the peculiarities of embryogenesis and morphological differences of thyroglossal and goitrous – pharyn-geal canals. Object and methods of research. Morphological part of the investigation, carried out on epoxy sections, using the self-developed technique, morphological structure of tongue in 5 human embryos on 18-20 weeks of gestation has been studied. Results of research and their discussion. In the 3-4th week of pregnancy a mesial part of thyroid gland primor-dium emerges at the root of tongue in the form of protrusion of ventral wall of pharynx between the I and II pairs of visceral furrows, due to which a thyroglossal canal (Bochdalek’s canal) is formed, connecting thyroid primordium with tongue. As growing in length, ductus thyreoglossus becomes thinner, and on 5-8 week of embryogenesis its lumen is obliterated, epithelized and fragmented in different ways in embryos of about 1 cm long (35-38-day of embryonic development). Heel of thyroglossal canal is saved, on the 8th week of embryogenesis, having differentiated in thyroid tissue, it bifurcates (at the level of III-IV pairs of visceral furrows), originating the right and left lobes of thyroid gland. In some cases the heel of thyroglossal canal may be of different form, location, and matches the point of attachment in the thyroid gland its pyramidal process that in 25% of cases is generally not identified. According to the investigations, the analysis of histotopographic sections on minor magnification of light mi-croscope concluded that the remains of thyroglossal canal on the 18-20 weeks of embryonic development are presented by deep invagination of multi-layer pavement epithelium of lingual surface deep into muscle of tongue on the area of its blind opening. Our point of view coincides with reported data, stated that epithelium of mucous membrane of tongue at the initial stage of embryogenesis consists of 1-2 layers of cells, and by the end of the 2nd month of fetation it becomes multi-layered. However, it is not excluded, that there is another mechanism of thyroglossal canal union, when single-layer epithelium, lining the canal on earlier stages of embryogenesis, by means of metaplasia, can be transformed into multi-layer pavement one, excluding the direct epithelium ingrowth from the surface of mucous membrane of tongue. In its turn, goitrous-pharyngeal canal at the investigated stage of embryogenesis, generally resembling the structure of thyroglossal one, has the evident morphological differences. Thus, in its all branches, the expressive cavities are observed. Furthermore, the wall of goitrous-pharyngeal canal is lined with single-layer high cylindrical epithelium. Assuming the reduction of this mass has the mechanisms similar to thyroglossal canal one, it delays in cases when single-layer epithelium is substituted by multi-layer one. Conclusion. The findings of morphological study of tongue ascertained the processes of epithelization of thyro-glossal canal lumen on 18-20 weeks of embryonic development during all investigations. Multi-layer epithelium of thyroglossal canal can be formed both by invagination of corresponding epithelium of mucous membrane of tongue and transformation of single-layer epithelium into multi-layer one. Obliteration of thyroglossal canal can occur due to apoptosis of epithelial cells with their further substitution by connective tissue, and abnormality of these pro-cesses, possibly, may lead to development of mesial cysts of neck. 18-20 weeks of gestation the thyroglossal canal, having evident cavities at lateral branches, is lined with single-layer high cylindrical epithelium. Perspectives of further research. Data, presented in the paper,can be the ground for further scientific research in the aspect of comparison of results of morphological studies with clinical ones. 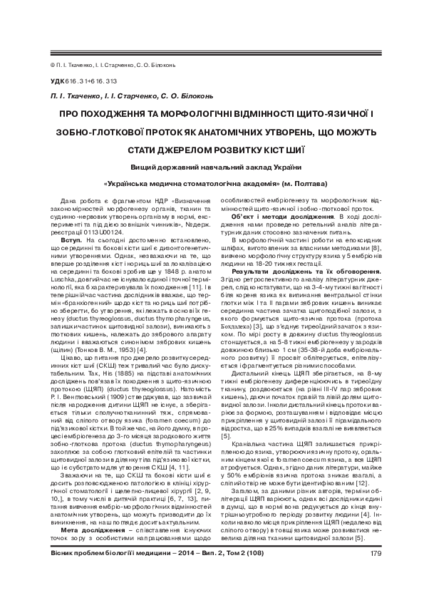