SECONDARY PLASTY OF RESIDUAL FISTULAS OF PALATE IN CHILDREN

Wide palatal clefts and large fistulas of the palate are difficult to repair owing to the lack of sufficient palatal tissue. Such tissue is generously provided by the buccinators myomucosal flap, which in one operation brings new tissue to the palate, allows lengthening of the palate, and leaves no raw areas at the donor site. The risk of recurrence of fistulas is diminished, because the suture lines of the nasal closure and the flap do not overlap, and because the additional tissue reduces tension on suture lines. In unrepaired wide clefts with short and narrow palate halves, the flap provides enough tissue to close and lengthen the palate primarily. The donor area is not altered in terms of function and aesthetics. Mastication and deglution are not impacted. For palatal lengthening, a Y-shaped flap is elevated. A continuous incision is made from the hard-soft palate junction to the base of the buccinators flap. The Y-shaped flap is rotated 1800 and transposed across the retromolar area. Its proximal segment and the inferior limb of the Y cover the defect created by moving back the soft palate, while the superior part of the Y covers the defect of the hard palate. No raw areas are left; no periosteal undermining is needed; and the palate is lengthened and pushed back toward the pharynx. The additional tissue that the buccinators myomucosal flap brings into the palate in a single operation has made the desing and execution of palatal fistula repair easier. Supplementing the scarce, scarred palatal tissues within the alveolar arch means that fistula repair, and probably subsequent maxillary growth, does not have to be jeopardized by tension on tenuous , fibrotic flaps. Nasal lining may be obtained from tissue adjacent to the fistula pedicled on the margins of the defect, from a contralateral buccinators myomucosal flap. A Y-shaped flap should be selected depending on the size, shape, and position of the fistula; whether more of the palate will be denuded by use of turnover flaps for nasal lining; and whether soft palatal lengthening is planned. The posteriorly based flap will provide tissue up to the incisive foramen area. Certain technical details should be observed to advoid complication. First, the flap should not be so wide as to make the closure of the donor area difficult or cause alterations in cheek distensibility. In the lower part of the donor area, a portion of the muscle should be left so that closure can be done easily. Elevation of the flap from the buccopharyngeal fascia should be done bluntly to avoid damaging the muscle. After transposition, the flap should be accurately positioned and carefully inset and securely sutured behind the tuberosity of the maxilla, because if there are dehiscences at this level, the flap pedicle can migrate onto the tuber-osity and be crushed by chewing movements, with consequent necrosis. The anterior extremities of the flap should include the full thickness of muscle; mucosa not underlain by muscle may die. We attentively observe the papilla of the parotid duct during the incision and the closure of the donor site, and have not had any papilla damage in our experience. The buccinator muscle˂s strategic position in the oral cavity permits its use as a partial myomucosal flap posteri-orly based and brought into the palate behind the tuberosity of the maxilla. The flap can provide tissue to all but the most anterior part of the palate. It can be used bilaterally, either concomitantly or serially. This flap is an important option in the closure of wide clefts, in the repair of palatal fistulas, and in providing tissue when needed for correction of velofaryngeal in sufficiency following primary palatoplasty. We have notice that the use of this flap lengthens the soft palate. In the correction of fistulas as well as in the lengthening of the palate, a subjective improvement of speech has been reported. We also can use the flap in the primary repair of cleft palate when the palatal flaps are narrow and short, which would leave the patient with a short palate and a large raw area. When the flaps is used, significant mucoperiosteal detachments are not necessary and tissue is added to the palate to cover all raw areas, which should enhance maxillary growth. 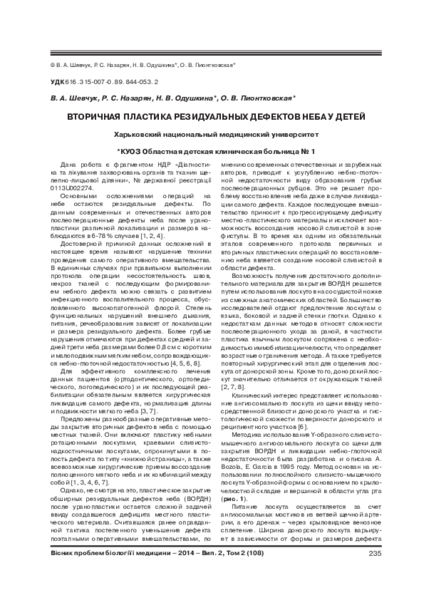