The Study of Reproduction of Hemorrhagic Septicemia Virus

The results of the study of the biological characteristics of the virus VHSV, in connection with a huge potential threat of entry of the virus into specialized fish industries of Ukraine. Determined by the pathogenicity of these isolates to rainbow trout fingerlings (Oncorhynchus mykiss). The aim of this study was to investigate the reproduction of isolates of VHSV under the conditions of in vitro in cell cultures and in vivo on the rainbow trout fingerlings. Materials and methods Fish. Rainbow trout fingerlings were bred at the experimental aquaria room of Institute of Fisheries of National Academy of Agrarian Sciences of Ukraine. Fish were healthy and tested upon the existence of the parasitic, bacterial and viral infections VHS strains. The following strains of VHS were used in research: reference strain-”DH4p101”; isolates PL-1 (6,8 lg TTsD50/sm3), PL-2 (6,2 lg TTsD50/sm3) provided by professor Jerzy Antihovich, National Veterinary Institute (Pulawy Poland), M-1 isolate (6,3 lg TTsD50/sm3) isolated from farms in Russia (VIEV provided Zavyalovoy EA). The propagation of the mentioned above viruses was carried out in the laboratory of fish pathology Institute of Fisheries of National Academy of Agrarian Sciences of Ukraine. Cell culture. Cell lines of FHM (fat head minnow), RTG-2 (rainbow trout gonads). The cultivation of the continuous fish cell cultures were carried out according to the guidance, specified by authors for every line. Mediums, solutions and sera. For the cell growth we used the mediums of Eagles MEM, RPMI-16 with double set of amino acids and vitamins and DMEM/F12 (Sigma) supplied from fetal bovine serum (FBS) and antibiotics (gentamycin, kanamycin, penicillin, ampicillin). Also the trypsin/EDTA solution (0,25/0,02%), 1М Hepes- buffer (рН 7,0) and 0,05% trypan blue solution were applied. Virus OR titer was determined by the statistic computation method and expressed in tissue culture infective dose in 1,0 ml (ТCID50/ml) (Reed and Mench 1938). Experimental infection. Rainbow trout (O. mykiss) fingerlings, bred at the aquaria room of IF NAASU, were used for the experimental infection. The experiments of the fish inoculation were carried out under the lab conditions in a separate room in 40 l tanks at 12єC. Two groups of trout fingerlings were took for the experimental and control variant, 10 species with body weight up to 15 g in every group. After the primary adaptation, fish were infected with VHS by the intraperitoneal injection method. The medium from not infected cell culture in amount of 1 ml per fish was used as a control. During the disease development the clinical signs, path morphological changes and fish mortality were noticed. Conclusions. It was found, that the investigated hemorrhagic septicemia virus isolates of different pathogenicity had trout in relation to rainbow trout fingerlings, and caused the death of 35 to 65%. The reproduction of these isolates in cell lines FHM, RTG- 2 advanced complex degenerative processes, accompanied by the appearance of vacuoles in the cells, grain, rounded cells, loss of their ability to adhere, which eventually led to the complete destruction of the monolayer. During the experimental infection, it was found that the disease was of a systemic nature, trout developed the septic process that led to the injury of almost all the organs and tissues. 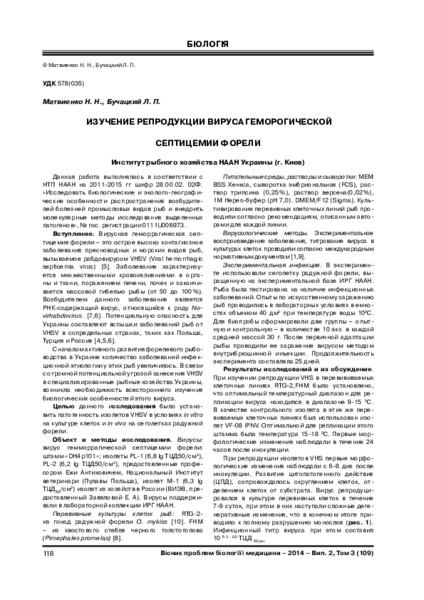