Clinical Features, Diagnosis and the Treatment of Lesions of the Lumbar – Sacral Spinal Cord

Lumbar – sacral radiculopathy is one of the most difficult variants of vertebral pain syndromes. it occurs in 3-5% of the population and it is characterized by the particularly intense, persistent, debilitating pain, accompanied by the sharp restriction of mobility and long-term disability. The main causes of lumbosacral radicu-lopathy include the degenerative dystrophic pathology of the spine, infectious diseases, tumors, inflammatory dis-eases, congenital anomalies, endocrine and metabolic disorders. According to modern concepts man distinguish-es nociceptive, neuropathic and mixed pain. Nociceptive pain plays a physiological role in monitoring and occurs in response to the damaging effects (an inflammation, a trauma, a muscle spasm, etc.). Neuropathic pain occurs during the primary lesion or dysfunction of the peripheral or central nervous system. It bears no protective function and tends to be chronic. Mixed pain includes nociceptive pain and neuropathic components. It is the mixed pain that prevalents in patients with radiculopathy. Neuropathic pain syndrome occurs in 90% of patients with lumbosa-cral radiculopathy and defines more severe and long ¬ time course of the disease, mostly it desapdates patients and makes the quality of life worse. Symptomatic and pathogenetic treatments of pain in the lumbar region of the dorsal surface of the trunk ( back ) include: nonsteroidal anti-inflammatory drugs (NSAIDs), which are most effective in the early stages of pain. The effectiveness of the gabapentin is clearly seen in various forms of neuropathic pain. In animal studies, the drug increases the synthesis of GABA, has a modulatory effect on NMDA- receptors, blockes the calcium channel α2δ subunit, reduces the release of monoamines, reduces the synthesis and transport of gluta-mate, reduces the frequency of action potentials of peripheral nerves. Probably a combination of the mechanisms of action, mentioned above, provides a high therapeutic efficacy of gabapentin in neuropathic pain of various forms of pain sindroma. This assesment of the pain syndrome is made by visual analog scale (Visual Analogue Scale (VAS)). This method of the subjective assessment of pain lies in asking a patient to mark the line on a non-graded point, which is10 cm long. It corresponds to the degree of the severity of pain. The left boundary line equels the definition of «no pain», right – «the worst pain which can be imaginated.» As a rule, man uses a paper, cardboard or plastic ruler which is10 cm long. On the reverse side of the rule centimeter points are printed according to which a doctor notes the value and fills them in the observation sheet, 1cm on the scale corresponds to 1 point pain inten-sity. The arsenal of medicine is constantly updated with new groups and drugs, which have a higher efficacy and reduces side reactions. In the last decade for treating neuropathic pain man increasingly uses gabapentin, which is a structural analog of gamma- aminobutyric acid, which relieves the physical condition and well being of the patient and helps to achieve positive therapeutic effect in the clinical practice. 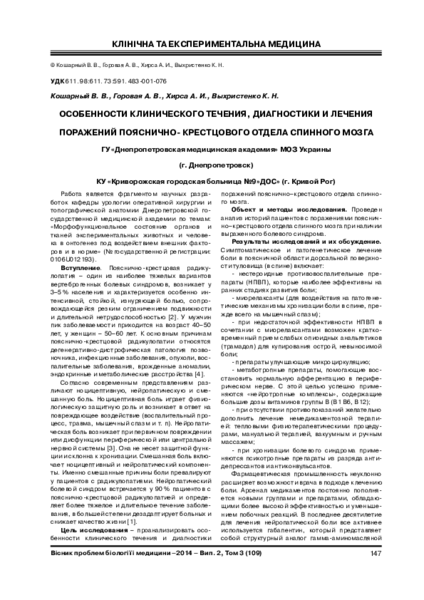