Bulletin of problems biology and medicine / Issue 2 part 3 (109), 2014 / Features of the Clinical Course at Localization of Hematomas in the Posterior Cranial Fossa
Koscharny V. V., Pavlov A. I.

Objective of this research is to establish features of the clinical course and diagnostics of heavy cra-niocereberal traumas. The analysis of the medical histories of patients, arrived in the department of Neurosurgery of the Mechnikov re-gional hospital of Dnepropetrovsk, with heavy craniocereberal traumas in the basic after road accidents was carried out. In patients in an unconscious state, a full examination is complicated. A Leading value is got by symptoms to which revealing the contact with the patient is unessential. For the purpose of the localization of intracranial hemato-mas, the obtained symptomatic data is always necessary to be compared with the part of the trauma, with the area of the damage of soft tissues, the place of the skull fracture. The part of the damage of the posterior cranial fossa is about 0,01-0,3% from all craniocereberal traumas; thereby it is heavy and rather rare. The grave condition of the patient complicates clinical diagnostics of the given kind of damage. Especially diagnostics of the damages which have appeared as a result of the trauma, and also the hemorrhages, which are under the cerebellar tentorium, and causing the development of the local and general compression of the brain. HEMATOMAS IN the posterior cranial fossa, depending on their relation to meninges and the substance of the brain, are divided into epidural, subdural, intrabrain, intraventricular ones. The specific gravity of hematomas IN the posterior cranial fossa in the structure of intracranial hematomas makes 2-3%. The most widespread kind of pathology is epidural hematomas, the number of which is 20 – 64% from all dam-ages IN the posterior cranial fossa, the number of cerebellum damages – intraventricular hematomas and cerebel-lum bruises is 15,3 – 26%, subdural hematomas make 5%. Features of the anatomic structure of the posterior cranial fossa: small volume (93 – 154 sm3), the smooth surface of bones, the presence of the cerebellar tentorium, causes rather the small volume of hematomas (in most cases up to 30 ml). Thus, the critical size of the hematoma which increase brings the trunk disposition, makes only 14 sm3. At a hematoma of the posterior cranial fossa, owing to their affinity to the basic ways of the liquor circulation, to the direct comprimed influence, the influence of the obstructive hydrocephalus, accelerating increase of intracranial pressure, can early join. In this connection, separate hematomas of the posterior cranial fossa reach the considerable volume – 50-70 ml. The main causes of death of both operated and not operated patients are the accruing hypostasis and brain disposition (30 – 40%). The second main reason- hemorrhage relapse (10 – 20%). About 2/3 patients who have had a stroke, remain invalids. The major factors, defining the outcome of the disease, are considered to be the hematoma volume, the accom-panying breakthrough of blood in ventriculus, the hematoma localization in the brain trunk, the previous reception of anticoagulants, the previous heart disease, and the advanced age. For today the basic indications to operation are defined: hematomas of a cerebellum in volume of 14 sm3 and more or when its maximum diameter is more than 3sm, the compression of the brain trunk, and the development of the obstructive hydrocephalus. A conservative treatment is effective in patients with hemorrhages in volume less than 14см3, which are not accompanied by in-fringement of the wakefulness, the disposition of the brain trunk and the obstructive hydrocephalus. The mortality at damages of the posterior cranial fossa it is very high. Among the patients, operated in terms of having intraventricular hematomas, the mortality is 50%. But, the hinhest mortality is observed in victims with com-bined lesions, hematomas of the posterior cranial fossa, when having the plural sub-and supratentorial compres-sion of the brain – over 80%.

a craniocereberal trauma, a hematoma 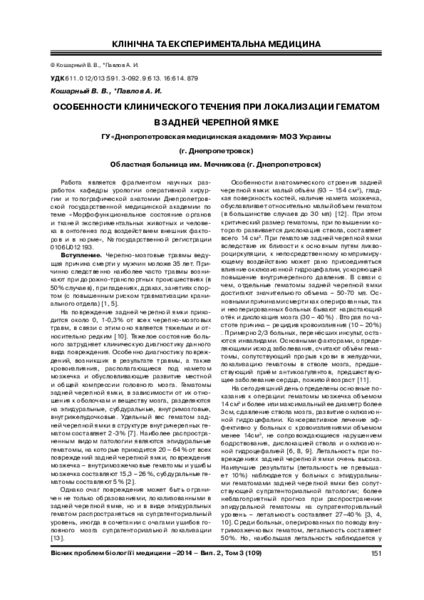