Role of Acid Glycosaminoglycans in Prenatal Development of Rat Liver

The role of stromal components, including extracellular matrix, is crucial in early ontogeny for liver dif-ferentiation. Proliferation, differentiation, apoptosis of hematopoietic and epithelial component of the liver takes place in a specific microenvironment organized by stroma. Stroma of fetal liver differs from mature in cellular structure and composition of the extracellular matrix. The latter is a matrix for cell migration with extrahepatic origin. The aim of the study was to determine the changes of the extracellular matrix in rat liver during prenatal develop-ment. Liver of embryos from intact white Wistar rats at 11, 12, 14, 16 and 18 days of prenatal development was exam-ined for acidic glycosaminoglycans by Stidmen’s staining. On 11th embryonic day the archlike beams were observed in the liver bud. The sinusoids around the liver beams were narrow. The acidic glycosaminoglycans were found in the basal layer of beams in small amounts. On 12th day in the central parts of the liver bud the large cavities associated with the formation of the vascular system were observed. The sinusoids around the liver beams were narrow in the areas of active hepatic differentiation. The peripheral or marginal zone had a thickness of 2-3 cells. In these areas acid glycos-aminoglycans were accumulated between different layers and at places where beams began to emerge. The beams had tubelike look or were massive without cavities inside. Beams in the central areas of the liver bud were thinner. Endo-thelial layer was separated from the cells of the parenchyma by layer of glycosaminoglycans. The concentration of the latter in certain areas of the beams may have been associated with the direction of their growth. Further development of the liver was accompanied by the formation of contact with the mesenchyme of the transverse septum and active inter-action with it through the zones rich in acid glycosaminoglycans. Some of hepatic beams were immersed in the mesen-chyme. On 14th day the peripheral zones of the liver were significantly transformated. They became thinner. Sinusoidlike vessels between the beams, were well developed in the peripheral areas of the liver, they may improve the trophic of these areas. The contact of hepatic parenchyma with mesenchyme of the posterior wall became wider. This area has demonstrated the high level of acid glycosaminoglycans. Part of mesenchyme was embedded into the liver and give rise to the liver connective tissue cells, smooth muscle cells of vessels and bile duct, stellate cells. Between the liver capsule, which started from the mesenchyme of the transverse walls, and parenchyma there was the layer of cells that have nonepithelial origin and were likely migrants from the mesenchyme. The thin layer of acid glycosaminoglycans was observed around these cells. This component of the extracellulary matrix was synthesized by the hepatic epithelium during the previous studies of development. So the acid glycosaminoglycans are involved in the processes of migra-tion of cell which have the mesenchymal origin. We believe that these cells are the progenitors of the vascular smooth muscle cells, Ito cells and other nonepitelial liver cells. On the 16th day of liver tissue becomes more dense. Liver lobules with the central vein approached the structure of mature hepatic lobule. The histochemical reaction for acid glycosami-noglycans was weak in both liver tissue and the surrounding mesenchyme. So, acidic glycosaminoglycans are essential for the formation of rat liver during 11-16 days of prenatal development. Subcapsular layer of these substances is a matrix for cell migration from transverse septum. 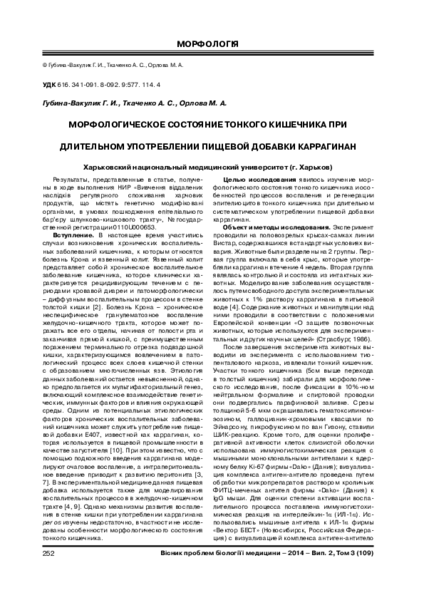