Adaptation disorders (AD) are considered to be rather widely-spread in a population and account for 5% to 20% of the total quantity of outpatients, who come to consult psychiatrists. The development of adapta- tion disorder can subsequently transform into another, more severe mental disorders (depressive, anxiety, panic, and phobic ones). Nowadays there are some predictions regarding the potential impact of life quality degradation, disorder of sexual behavior and sexual life onto AD initiation and its specific clinical course. In this way AD origi- nation may be caused by disorders of sexual behavior and sexual life, as it comes particularly to specific features of psychosexual and psychosocial traumas, hormonal dysfunctions (absolute or relative androgenic deficiency), and sexually transmitted infections. The rate of anxious-depressive disorders has been significantly increased in Ukraine recently. Official data issued by Ministry of Public Health of Ukraine shows that the quantity of depressive patients accounts for 0,5–2,5% of the entire population. Under conditions of informed agreement, 66 female individuals have been examined, who visited clinical facility of Department of Psychiatry, Medical Psychology and Narcology at HSEEU “UMSA” for consultation and medical aid. Most of them were married. The first group included 37 women and, correspondingly, married couples (MC), in which a woman (56,1%) has been diagnosed a prolonged depressive reaction (PDR); the second group included 29 (43,9%) women with clinical manifestations of mixed anxious-depressive disorder (MADD) and married couples (MC) with clinical signs of development of marital maladjustment (MM). 12 married couples, in which women had clinical signs of PDR or MADD manifestations, and where no signs of MM development have been examined as comparison group. 9 women (13,6%) were single and were not in civil marriage at the moment of examination. Complex of conducted studies included clinical examination of both men and women, including somatic, neuro- logic, mental status and specific sexological examination, as well as psychodiagnostic examination of single women and each of the spouses. Taking into consideration the specific character of clinical manifestations of the disease, special attention has been given to clinical-psychopathologic method presented in the form of detailed clinical interview with the analysis of mental status and psychoanamnestic data. Mental state of a couple has been examined by psychodiagnostic techniques. Findings of the studies have shown that women experienced disorders of common, interpersonal and sexual communication due to constellation of psychopathological, pathopsychological and negative sociopsychological factors. Overwhelming type of sexual dysfunction (SD) in women, suffering from AD with PDR, is lack of sexual sat- isfaction, loss of sexual desire and orgasmic dysfunction. Findings of the studies have established that in AD in the form of PDR, MADD, non-functional types of marriage prevail. Complex study enables identification of psychoemotional state, orientation, specific characters of sexual be- havior and its motivation aspects, degree of psychological adaptation (PA), typology of marital relations in women with AD, PDR and MADD, in particular, to enhance treatment-and-rehabilitation process and increase the quality of life, and provide with new aspects of medical-psychological and psychotherapeutic aid. 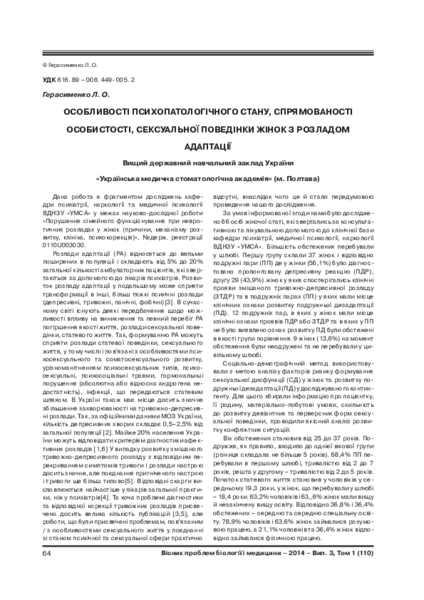