Principles of Prevention of Iodine Deficiency Disorders in the Poltava Region

The term “iodine deficiency disease” (IDD) is used to designate the adverse effects of iodine defi- ciency (direct or relative) on the growth and development of the organism. Iodine deficiency is the main cause re- tardation of mental development of children, 43 million is observed mental retardation of varying degrees, of which 11 million – cretinism. We studied the drinking water used by residents of the Poltava region, on the iodine content, fluorine, radionuclides and analyzed morbidity of thyroid in Ukraine and Poltava region. Evaluating the ecological situation in the Poltava region, we note that this region is the zone of moderate iodine deficiency because a decline in the iodine content in all aquifers of Poltava region. Increases iodine deficiency and elevated levels of fluoride in Buchach aquifer. It should be noted that for the last 20 years in the Poltava region thyroiditis increased proportion of 54. 5 times, while in Ukraine – in 31. 7, 18. 3 times increased volume of nodular goiter, in Ukraine it rise to 12, 7 times, thyroid cancer increased up to 0. 6 times, in Ukraine – up to 0,4 times; hypo- thyroidism – up to 3. 6 times, this pathology has grown up to 4. 2 times in Ukraine in general and the proportion of diffuse toxic goiter – a total of 1. 3 times, in Ukraine – 3. 1 times. According to the Regional psychological-medical- pedagogical commission, which keeps records of children with congenital and acquired diseases of intellectual and memory issues ( different forms of autism, delayed mental and the material development, hearing impairment, vision, etc.). Formed group personal training in specialized children’s gardens and schools. These data indicate that the number of children with similar disorders in the past 12 years has increased. Thus, in 1992 the number was 588, whereas in 2003, there were 2137 children, that number had increased 3. 6 times. So the starting point of thyroid disease in general, in the Poltava region is moderate decrease in the concentra- tion of iodine and fluorine substantial increase in the environment, imbalance between iodine and fluorine, radionu- clide contamination determines the structure of thyroid pathologies in this region. Implementation of prevention of IDD considering regional features of iodine deficiency more efficiently, than treating the consequences of iodine deficiency, especially as some of them (mental retardation, cretinism) is practi- cally irreversible. Daily need for iodine is extremely small is 3-5 g of iodine. The norm of iodine should receive daily, year after year. It’s Enough to forget about it, as iodine deficiency reminds of itself. Real consumption of iodine in Ukraine is only 40-60 mg a day that two to three times lower than the recommended level, which requires the imple- mentation of measures for the prevention of mass and group, taking into account regional differences in iodine deficiency. For optimal realization of this program is essential educational activities among all groups of population (the organization endocrinology clinics at schools and to highlight this problem in the media). 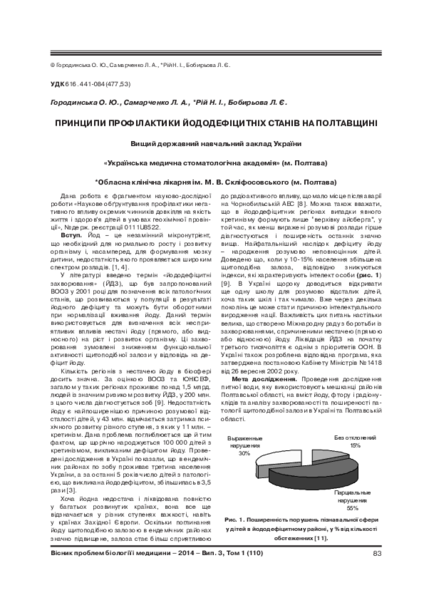