Historical stages of medical and social expertise formation have been analyzed from the times of Prince Volodymyr till nowadays. The first standard acts have been defined, which were the guidelines for mainte- nance of disabled people. Dynamic development of medical and social expertise of the twentieth century has been described in details. In 1948 the Council of Ministers of the USSR issued a Directive stated the new “Decree on Activity Therapy Ex- pert Committees (ATEC)”, stipulating the extension of main tasks of ATEC activity, stressing on evident preventive and rehabilitating trend of disabled people. Organization and membership of ATEC has been significantly changed. Committees were organized using the facilities of medical institutions in compliance with authorized list. Medical institutions had to provide ATEC with appropriate facility and necessary medical and logistic equipment. Members of the Committees were three expert physicians on major specialties and representatives from the Social Security Department and Trade-Union Organi- zation. Activity of both representatives was paid at the expense of costs, allocated for ATEC maintenance. For the fist time, one of the expert physicians was appointed as the Head of ATEC. Management and control of the ATEC activity was performed by the Social Security Ministries of autonomous republics, regional and local (cit- ies of republican subordination) Social Security Departments, using as the facilities for organization of respected republican, regional and central local ATECs. The purpose of the Committees was to examine individuals, who ap- pealed against the medical reports made by the district and local ATECs, as well as examination, made in particu- larly complicated cases according to referrals of district and local ATECs. The similar organization of institutions, carried out the expertise on disablement, existed almost till 1996. At that time (1950) in Poltava corresponding dispensaries were used as the facilities for specialized tuberculosis and psychiatric ATEC formation. The process of formation of higher ATECs, i. e., republican and regional, began. Stationary expertise of ability to work was further developing. Currently Poltava Regional Center of Medical and Social Expertise is the national institution of public health, or- ganized in compliance of the Resolution of Cabinet of Ministers of Ukrainian SSR issued in July, 25, 1991, No. 107 “On the Organization of Medical and Social Expertise in Ukrainian SSR”, Decrees of Minister of Social Security of Ukrainian SSR issued in August, 9, 1991, No. 83 and Minister of Public Health of Ukrainian SSR issued in August, 5, 1991, No. 123, by reorganizing of ATEC into Medical and Social Expert Committees (MSEC). Its activity aims at provision of medical and social expertise for individuals, who consulted medical institutions as for ascertainment of disablement with the purpose of identification of the stage of limitation of life activity, reason, time of initiation, disablement group, as well as compensatory-adaptive abilities of individual, realization of which enables medical, psycho-educational, professional, labor, physical training and sport, physical, social and psycho- logical rehabilitation (Resolution of Cabinet of Ministers of Ukraine issued in December, 3, 2009, No. 1317, “Issue of Medical and Social Expertise”). Therefore, the history of formation of medical and social expertise ascertains that human society, based on the principles of humanity, is constantly trying to balance between strong (state machine) and weak (individuals with limited physical abilities), hence the activity of medical and social expertise is directed and coordinated by the state institutions from the very first days of its formation. Stability and effectiveness of these interactions is achieved by the aspiration of the first to patronize those, who lost the ability to work and are experiencing limited life activity, and the latter to facilitate the rehabilitation process. 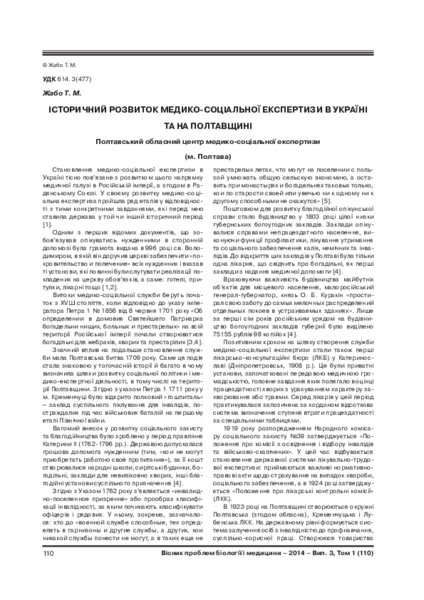