According to epidemiology data breast cancer (BC) takes the first place in the structure of incidence rate and mortality of malignant neoplasms in female population in Ukraine. There are some differences in the incidence of BC in separate administrative- territorial units (regions), one of which is difference in incidence rates among urban and rural population. On the other hand, unidirectional trends in the incidence of BC among urban regional centers in the geographically distant regions of Ukraine can be traced. Worldwide experience proved the necessity to implement the screening program for detection of BC among high-risk group. The leading diagnostic method in these programs is X-ray mammography. The purpose of this study is to conduct the comparative analysis of incidence rate of BC in female population in regional centers of Pridneprovsk-Donetsk intensive industrial region (Dnepropetrovsk) and Transcarpathian region (Uzhgorod), as well as to assess the impact of screening programs on indicators of one-year mortality of patients with BC. Annual reports of National Cancer Registry of Ukraine represent the sources of this study. Intensive rates of BC incidence rate and one-year mortality in the regional centers were compared with the generalized parameters of corresponding regions in the same years. Effectiveness of the mammographic screening was evaluated on the dynamics of one-year mortality rate. The incidence rate of breast cancer in Uzhhgorod in 2009 – 2013 was 76. 3 cases per 100. 000 of female population. At that time, this index was lower for 43. 1% and amounted to 43. 4 per 100. 000 of female population in all Transcarpatian region. The “peak” value of BC incidence rate was 94. 2 cases per 100. 000 of female population in Uzhhorod in 2012. This data are very close to the same index in Central and Western Europe. Symmetric trends were identified in the Dnepropetrovsk region. The “peak” values of the incidence rate of BC in the regional center (Dnepropetrovsk) exceed 90 – 91 cases per 100. 000 of female population in 2004 – 2005. At that time, common data in all Dnepropetrovsk region was 69. 6 per 100. 000 in female population. In our view, the tendency to increase of the incidence rate of BC in female population in the city is the result of summation of large number of adverse factors associated with changes in gender behavior in process of urbanization. These include postponing of the first pregnancy and childbirthin older age, limiting the number of births, abortion, irrational contraception, refusal to breastfeeding and other. The high incidence rate of BC and its leading position in the structure of morbidity and mortality in Ukraine led to implementation of the screening programs into the public health practice. The main method of screening for BC is X-ray mammography. The need for wider implementation of this diagnostic technology is fixed in State Program “Reproductive Health of the Nation until 2015” and “National strategy for fight against cancer for the period up to 2016”. It is clear that the existing health infrastructure does not meet the requirements for the organization of the total mammographic screening. But the program of mammography screening in Dnepropetrovsk showed positive results. Between 2003 and 2007, the one-year mortality rate of patients with BC decreased from 12. 7 to 6. 8 % and was subsequently stabilized within 7 – 8%. Thus, persistent increase in the incidence rate of BC in female population in the regional centers over the average regional data was registered. A significant factor in these differences can be the change of gender behavior in the process of urbanization. The implementation of mammographic screening program contributes to the detection of BC in the early stages and enhances radical treatment that reduces total and one-year BC mortality. 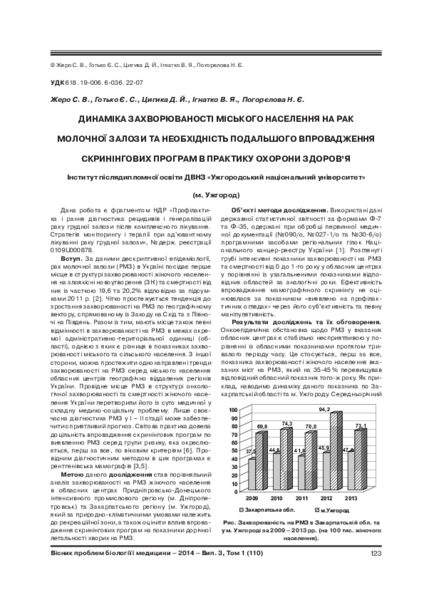