Bulletin of problems biology and medicine / Issue 3 part 1 (110), 2014 / Prevention of Relapse in Alcohol Dependence on the Stage of Remission
Zhyvotovska L. V.


Prevention of Relapse in Alcohol Dependence on the Stage of Remission

The main objective of the treatment of alcohol dependence is to achieve sustainable quality remission and preventing relapses. It identifies the leading role for the correction of behavioral therapy and psychosocial destabilize both stages of remission, and in combination of anti- treatment to patients’ reintegration into society. The aim of the study was to investigate the effectiveness of psychotherapeutic interventions in the treatment of patients with alcohol dependence at the stage of remission . Under our supervision there were 290 alcohol dependent patients, all men aged 23 to 59 years. Nosological diagnosis was based on the criteria of ICD-10 (F10. 2-10. 4). All patients were randomized into 3 groups: the main group 1 (MG1, 75 persons who in addition to standard therapy, metabolic correction was carried out using actovegin and thioctic acid), the main group 2 (MG2, 75 persons who in addition to standard therapy conducted metabolic therapy and psychotherapy) and the comparison group (CG, 50 people who received only basic pharmacotherapy). To evaluate the therapeutic effects of using Clinical Global Impression Scale (CGI-I), Hamilton Rating Scale for Depression (HDRS), Spielberger-Hanin Scale to assess the level of reactive and personal anxiety. The complex system of therapy at the stage of remission consisted of three stages. The first stage – motivating therapy – started after the elimination postintoksykatsiynyh and abstinence disorders. At this stage pharmacotherapy helped stabilize the physical and mental condition. The course of psychotherapy (PT) in groups of 10 persons started during their ill patient treatment. In the first phase of therapeutic interaction, individual and group sessions were conducted 60 minutes 2 times a week for 2 weeks. Actually psychotherapeutic work was aimed at establishing the therapeutic relationship. The purpose of this phase was to create motivating patients to participate in group therapy, overcoming anosognosia, decrease anxiety associated with the necessity of self-disclosure . In the second phase of treatment and rehabilitation – phase focused therapy – in the spotlight during the PT was actual intra-personal and interpersonal conflict. Actually psychotherapeutic work was aimed at an optimal balance of support and frustration, active confrontation with the regressive stereotypes. Phase duration was 8-10 sessions. The third stage of treatment – maintenance therapy (in the outpatient setting) – was a crucial step, as it it were formed units to achieve significant positive goals, social and vocational rehabilitation, adaptation to new conditions, locked in the regulatory part of the individual, compensation and somatic mental functions. Group therapy sessions had a duration of 90 minutes and were conducted 1 day a week for 4 months, also conducted family therapy or individual therapy 1 time a week. In the medical sense maintenance treatment of patients with alcohol dependence was aimed at treatment and prevention of possible “disruption” and relapse. Conducted follow-up studies showed that the remission more than 12 months MG2 4,5 times greater in MG1 – 2,3 times more than in CG (p<0,001), respectively, 36,0%, 17,3%, 8,0%. Thus, the proposed system is phased psychotherapy in treatment of patients with alcohol dependence at the stage of remission, which combines individual and group forms of therapeutic intervention in the system Gestalt approach contributed to the formation of intrinsic motivation, improving emotional and personal sphere of this group of patients, the expansion of social contacts and can be used as an effective component of medico-social rehabilitation to prevent relapse. 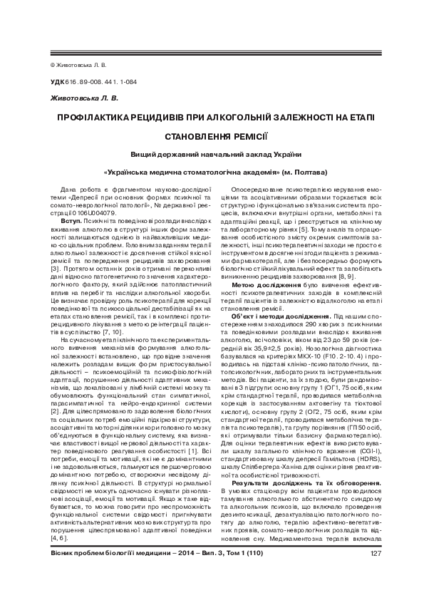