Bulletin of problems biology and medicine / Issue 3 part 1 (110), 2014 / Сytokines, Major Mineral Elements and Trace Elements under Violation of Morphofunctional State of the Pancreas of Pregnant Rats and their Offspring Resulting from a Hypоcaloric Diet
Kovaltsova M.


Сytokines, Major Mineral Elements and Trace Elements under Violation of Morphofunctional State of the Pancreas of Pregnant Rats and their Offspring Resulting from a Hypоcaloric Diet

Introduction. The pathology of the pancreas caused by the influence of exogenous pathogenic factors is an actual problem of modern medicine. Modern conditions of human life, and those of pregnant women in particular, result in a problem of fighting long mental and physical stress. The purpose of the study was specification of pathogenetic actions in the violated pancreas followed by the affectation of adverse exogenous factors in mother-fetus system via analysis of characteristics of major mineral elements and trace elements under violation of morphofunctional state of the pancreas of pregnant rats and their offspring resulting from a hypоcaloric diet Materials and Methods. We studied morphological changes of pancreas of pregnant rats and their offspring using histological, cytochemical, cytomorphometric and biochemical methods. A core group of adult rats received hypocaloric diet, while their offspring received normal balanced diet. Comparison group consisted of animals with a balanced diet, and their offspring of the same age. For the rats, the experiment was stopped immediately after the birth of offspring in compliance with the ethical principles. Results. The pancreas of pregnant rats treated with hypocaloric diet revealed morphological changes: reduced parenchymal area and acini, edema, fibrosis and lipomatosis stroma, its inflammatory infiltration, degenerative changes in the nuclei and cytoplasm, activation of apoptosis of exocrine pancreatic cells. Stress during pregnancy in rats affects the morphology and function of the pancreas in the offspring. Symptoms of morphofunctional disor- ders are obvious even in the pancreas of newborn rats (and they are similar to those of their mothers). Most of them not only saves up until they are two months of age, but has a negative trend of growth severity: reducing the relative amount of parenchymal acini area, number and area of the islets of Langerhans, the number of endocrine cells in them. Young rats also presented immaturity of the parenchyma, moderate congestion of the capillaries. The rats in all groups are diagnosed as having identical tendencies of cytokines change; significant buildup of pro-inflamma- tory interleukin-12 and reduction of anti-inflammatory interleukin-4 which indicates predominant involvement in pathogenesis of violation of pancreas cell component of immune system. The study of macro-and microelements level in the tissue homogenate showed an increase of calcium level by 20. 9 % in 100 % of the rats-mothers. Magne- sium level decreased in 50 % of the rats (20% showed normal level, 30% – increased), while the average value of the index did not differ from that of animals of the comparison group. The level of zinc (in average by 44. 7 %) reduced in 100 % of animals. All the rats of both groups, in contradistinction to their mothers, showed a significant decrease in calcium level, while the content of magnesium and zinc are the same as in those mothers, but lesser degree of se- verity. The findings allow to conclude that morphofunctional changes of a hypоcaloric diet violation of the pancreas combine with macrocell imbalance (calcium and magnesium) and reduction of zinc level. These affect intracellular metabolism of pancreacytes, both exo- and endocrine secretory activity that can be a reason for aggravation of the pancreas, and promote inflammation and pancreatic deficiency. Conclusions. The results suggest that chronic stress of pregnant rats is a significant risk factor for future chronic pathology of the pancreas (including diabetes mellitus) not only in rats themselves, but also in their offspring. 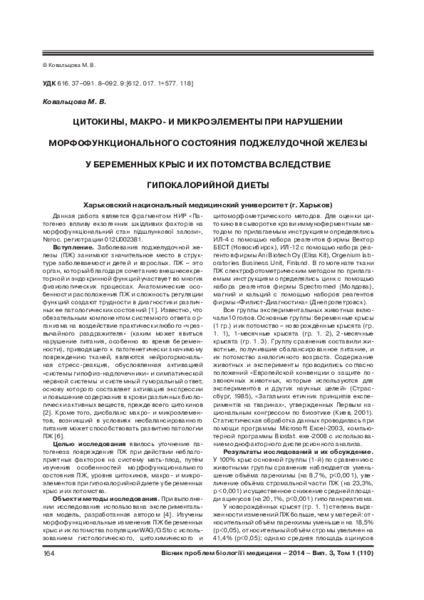