The problem of extrahepatic manifestations of chronic hepatitis B yearly becomes more important, not only for practical public health but also for society and economy. Because this not just statistical rates of disease expansion, but also people of working age, who need hospitalization and expensive treatment, not only because of liver damage, but also because extrahepatic manifestations of the underlying disease. Today, special attention is paid to hepatitis C because of the very high rate of complications and adverse effects. Compared to HB – viral infection, it produces not only much higher percentage of cirrhosis formation of and liver cancer, but significantly higher risk of extrahepatic manifestations. According to WHO experts, about 300 million people all over the world are infected with hepatitis C virus; there is a constant increase in the incidence of viral hepatitis C. According to the data of Ministry of Public Health, Ukraine is one from the countries with a medium degree of hepatitis C spreading – approximately 3 % of citizens are infected, which is ~ 1.17 million people. Currently, there are many articles about the treatment of hepatitis C, but there are less amount of articles, which describes the right way to deal with the consequences of liver disease and extrahepatic manifestations. This article will cover the impact of influence of amino acid preparations of ursodeoxycholic acid and ademetionin both to hepatitis C and its extrahepatic manifestations. Modern treatment of chronic hepatitis C is based on the usage of pegylated interferon as monotherapy or in combination with the other antiviral agents such as ribavirin and protease inhibitors. However, it was shown that such treatment is not effective in all patients with chronic hepatitis C, as well as in all patients with liver cirrhosis. As a primary endpoint reflecting liver function, it was evaluated plasma levels of ALT; as secondary endpoints – AST and GGT . The values of these indicators were determined by conventional methods. Blood samples were taken during the observation period and at 1, 4, 8 and 12 – week after the beginning of therapy. At these time points were measured plasma levels of ALT, AST, GGT, albumin and total bilirubin, was calculated platelet count. Compliance to receiving UDCA and ademetionin and the development of complications was assessed by asking patients or on the basis of data from their diaries. During the analysis of the results it was observed a clear positive effect from all hepatoprotectors. However, it was shoved the marked difference between the severity of effects between groups. So, the severity of asthenic syndrome, which completely disappeared in 22 % of patients in group 1 and decreased in other groups till the end of treatment, by 43 % in 2 and by 59 % in 3. Itching disappeared completely in 24 % of patients, who experienced it prior to the beginning of therapy and decreased significantly by 30 % only in 2 treating group. It is important to emphasize that 2­3 weeks after therapy it was observed the decrease of itching in 15 % of patients. Jaundice disappeared completely in 18 patients, who experienced it prior to the beginning of treatment, decreased in 82 % of patients, which was also significantly only in 2 group. The effects on biochemical parameters includes the reduction of bilirubin during the treatment by 21 % and alkaline phosphatase activity – 18 %, which were also significant only in 3 group, and gamma­glutamyl (gamma­ GTP) – 7 % in the first group, 19 % in the 2 and 11 % in 3group. Also it was observed a significant reduction in transaminase activity in all three groups. So, reducing the activity of ALT in 1 group was 22 %, in 2 – 58 %, in 3 – 41 %; AST in 1 group was 20 %, in 2 – 41 % in 3 – 53 %. It was found an impact on the urea level in group 1, which was 22 %, in 2 – 31 % and in 3 – 35 %. Further detailed study of extrahepatic lesions in patients with chronic hepatitis C will significantly improve the diagnosis, prevention and correction of them to improve the quality of life for patients. 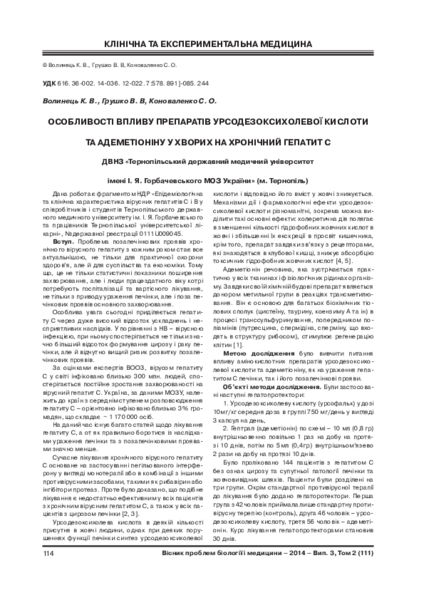