Features of pregnancy during pregravidor training

The name and number of the state registry of scientific topics. “The study of the pathogenic mechanisms of diseases of the reproductive system in women, development of methods to improve their prevention, conservative and surgical treatment and rehabilitation” State Number: 0112U002900 The frequency of spontaneous miscarriages is about 15­20 % of the total number of detected pregnancies. In the early stages pregnancy miscarriages occur in 40 – 80 % of all spontaneous breaking. Almost half of women do not even realize that they had become pregnant. In 80 % of spontaneous abortions occur in the first 12 weeks of pregnancy. The aim of this study was to determine pregnancy in women who were preparing for pregnancy and were registered at the antenatal clinic and women who became pregnant without examination and training. Another aim was to study gynecological and somatic pathology in women with threatened abortion up to 12 weeks. 120 women were examined. And a group of 60 pregnant women with threatened abortion before 12 weeks of receiving preserving therapy in gynecology department of Poltava city maternity II – 60 to 12 weeks pregnant, standing in the antenatal clinic registered. A clinical­ anamnestic analysis, general clinical research and studied infectious and hormonal status of pregnant women. The average age of the patients was 29,6 ± 3,7 years. The average gestational age at admission to hospital was 9 ± 1,4 weeks. For all women pregnancy was desired but only 8 (13,3 %) prepared from them (inspected on infections which are passed a sexual way, inspections for endocrinology, inspected a man, accepted folic acid). The main complaint in 50 (83.3 %) pregnant women on admission were bleeding from the genital tract in 43 (71.7 %) – lower abdominal pain. In 42 (70 %) women – this last pregnancy prior to delivery, 38 (63.3 %) were women except pregnancy and abortion, and 10 (16.7 %) women given preceding pregnancy abortion. In 33 (55 %) had a history of inflammatory diseases of the pelvic organs, uterine leiomyoma – 4 (6.7 %). Both groups had the same age, had compromised somatic and obstetric and gynecological history. At vaginal research the basic signs of threat of terminating pregnancy were: dense body of uterus which answers the term of pregnancy in 53 (88,3 %), shortening of neck of uterus, – in 7 (11,7 %) women. Bloody moderate excretions were established in 48 (80 %) inspected. Also at a review in mirrors found out the signs of colpitis in 5 (8,3 %) and signs of endocervicitis – in 12 (20 %). Treatment was conducted in obedience to Order of MOZ of Ukraine №624 from 03.11.2008 year, with the use of preparations of progesterone, spasmolysants, and vitamin preparations. In 59 (98,3 %) patients pregnancy was stored, for a 1 woman – pregnancy did not develop and stopped beating in a term 7 weeks (it was in future conducted vacuumaspiration and antibacterial therapy). The pregnant were written with recommendations under the supervision of doctor of gynecologist of womanish consultation. A middle hospital­day made 9 ± 5,1 day. What does a woman with a normal pregnancy is 1.6 times more likely to have had an aggravating factor. But the presence of conditionally pathogenic microflora in these women appeared to be 2.6 times smaller than pregnant women who did not were examined. Therefore, careful preparation and close contact with an obstetrician gynecologist at the family planning had some positive effects. It can be concluded that the key to successful planning for future pregnancy is a personal wish of every mother to prepare your body for the upcoming event, and not perceive itself under preparation as required worship or routine duty. Prospects of subsequent researches in future can be drawn on research results, as recommendations for a prophylaxis problem of early losses of pregnancy. 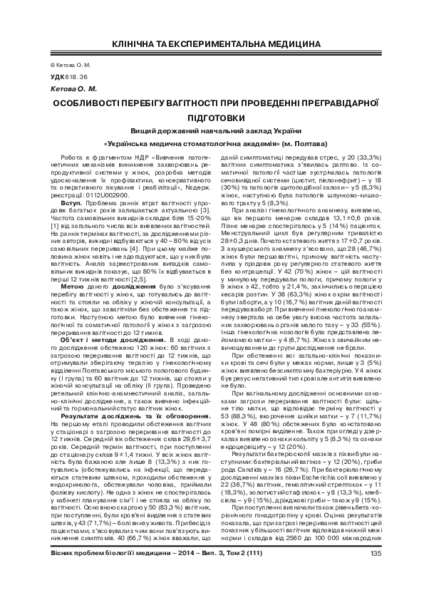