Colorectal cancer (CRC) is one of the most frequent malignant neoplasia in individuals of both sexes. Genetic alterations play a significant role in the development of all colorectal malignancies, including adenomatous and hamartomatous polyposis. The incidence of the monogenic diseases of small and large intestine – familial adenomatosis polyposis (FAP) and syndromes of hamartomatous polyposis, has been estimated to be approximately 1:10,000 – 1:250000 in newborns with approximately to 100 % penetrance. The majority of patients with these disorders will develop CRC due to the vast number and early onset of polyps. The aim of the study was to investigate the spectrum of mutations of the АРС, MYH and STK11 genes in the families of probands with adenomatous and hamartomatous polyposis with early age of CRC manifestation and was found out the risk group among the relatives of the probands. The genealogic analysis, molecular and clinical investigations has been carried out in patients from Ukraine with some monogenic syndromes of intestine. Genomic DNA was extracted from peripheral blood cells. The APC and STK11 genes amplified fragments were screened for mutations involving the heteroduplex analysis (HD) and single­strand conformational polymorphism (SSCP) methods. The mutations of АРС and STK11genes were identi­ fied using automatic DNA sequencer. The small sequence changes within the examined fragments in the STK11 gene was detected using the high resolution melting (HRM) analysis. To detect deletions of one or more exons multiplex ligation dependent probe amplification technique (MLPA) was also used. The most common mutations of MYH gene were screened by restriction fragment length polymorphysm (RFLP) analyses. This article summarizes the genetics, clinical manifestations of each of these syndromes and an emphasis on genetic testing and young age of cancer onset in patients carried mutations. The marked mutations of APC gene were detected in 7(63. 6 %) of probands with FAP. The greatest quantity of patients with early manifestation of CRC, carried the mutations of APC gene, was observed in family the proband with the deletion of one nucleotide, caused by a frameshift mutation. The average age of CRC onset in patients carried APC mutations is 33.6 years. The youngest age of CRC onset was diagnosed in proband carried mutation, caused by the deletion of 16 nucleotides. Multiply colon cancers and malignancies outside the gastrointestinal tract occur at an increased frequency in this group of patients. Soft tissue tumors and osteomas were also found in the group of patients carried APC gene mutations. Patients with multiply adenomas who do not exhibit an autosomal dominant pattern of inheritance of polyposis carried biallelic mutations in the MYH gene were a risk group of young age of CRC onset. The youngest age of CRC manifestation in patients with hamartomatous polyposis – Peutz­Jeghers syndrome (PJS), was diagnosed in pro­ band with STK11 gene mutation с. 493G>T, p. Glu165X in 4 exon. Early identification of APC, MYH and STK11 gene mutations and intervention can dramatically reduce the risk of malignancy in patients with monogenic cancer syndrome of intestine. 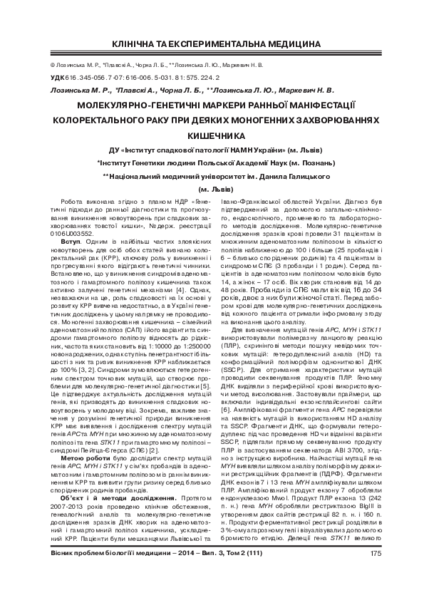