Bulletin of problems biology and medicine / Issue 3 part 2 (111), 2014 / The Relationship between Interleukins and Functional Activity of Platelets in the Model of Bone Disorder
Pavlov S. B., Goncharova A. V., Kumechko M. V., Frolova T. V.

In the rat model of combined effect of immobilization stress and inflammation on bone tissue me­ tabolism increased levels of interleukin­4 (IL­4), increasing of platelet aggregation speed and the relationships between the content of interleukins 4 and 6 and functional activity of platelets have been revealed. Cytokine imbalance is important in the pathogenesis of bone turnover . Inflammation starts metabolic changes that lead to the predominance of bone resorption over the processes of its synthesis. A close relationship of the immune system with the mechanisms of the hemostatic system in the inflammatory process allows to discuss the role of platelets in the pathogenesis of osteoporosis. In platelets besides the receptors and products of secretion performing classical role in haemostasis and throm­ bus formation, there are a large number of different substances produced by these cells and receptors that are active in the processes of inflammation, immunity and tissue regeneration. Platelets express many immunomodula­ tory molecules (e. g., P­selectin, CD40L) and cytokines (e. g., IL­1β, transforming growth factor­β) and are able to interact with different types of immune cells. Interferon­γ and IL­2, as mediators of inflammation are able to activate platelets. Interleukin – 4 is a pleiotropic immunomodulatory cytokine secreted by T2 lymphocytes­helper cells, eosinophils and mast cells. The effects of IL­4, which were previously considered as anti­inflammatory, really have a dual nature, and IL­4 functions as a cytokine regulator, but not as an effector. IL­4 significantly activates VCAM ­1, E – selectin , MCP ­1 and IL­6, characterizes it as a key mediator that directs changes in the vascular endothelium with prooxidative and proinflammatory pathways. In this regard, the relevance of studies on the relationship cytokine profile with the functional activity of platelet disorders of bone metabolism is obvious. The aim of research is to identify the relationships between the content of IL­4 and 6, and platelet functions in rats with a combined action of immobilization stress and inflammation on bone turnover. Object and methods. The study was conducted on two groups (each of 20 animals) of white female rats aged 6 months. Immobilization stress created by putting animals in close boxes for 4 hours daily during a month. A month after forming of immobilization stress the model of chronic inflammation reproduced by 10 injections of 0.5 ml of the bile of cattle into liver projection intraperitoneally daily. As an inducer of aggregation adenosine diphosphate (ADP) was used in the concentrations of 2.5, 5.0 and 10.0 mol / l. Results. In rats with the model of bone disorder level of IL ­4 increases at 34,11 % compared to control (p < 0,05), the aggregation rate at a concentration of ADP 2.5 mmol / L also increases, and the relationship between the level of IL ­4 and the degree of aggregation and between the level of IL­ 4 and the aggregation rate at a concentration of inducer 5 mmol/l and the relationship between the level of IL ­6 and the time of achieving of the aggregation rate maximum at a concentration of the aggregation inductor 10 umol/l. Correlations between the parameters of platelet aggregation and levels of interleukins predominantly negative and quite strong. The cases of correlation between the levels of interleukin and platelet function parameters confirm the presence of points of interaction between the functioning of the hemostatic system and cascade of cytokines. The combined effect of prolonged stress and inflammation causes a depletion of reserves of organism adapta­ tion that responds to the impact by rising levels of immunomodulatory cytokine and reduce the possibility of func­ tions that provide vascular­platelet hemostasis. Conclusions. In rats with a model of the combined influence of immobilization stress and inflammation on bone turnover revealed increasing levels of IL­4, the rate of aggregation increasing and correlation between interleukin 4 and 6 and the functional activity of platelets. Such changes indicate the depletion of organism adaptation reserves. 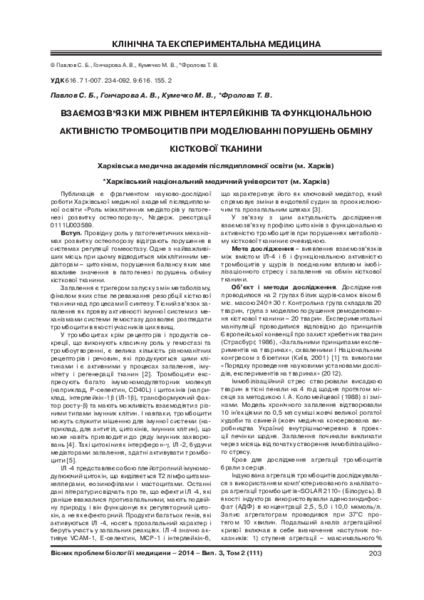